26-30 September 2009  The month ended dry, hot and sunny as it has been all month. Not so good for migration but great weather. On 29th I noted my first Jack Snipe of the autumn at the WWT South Lake. On 30th I located three Harvest Mice at the same site which was notable as it is a new site.

25 September 2009 A couple of new species for my garden list today, Hornet and Golden Plover over South, also a Siskin went South. 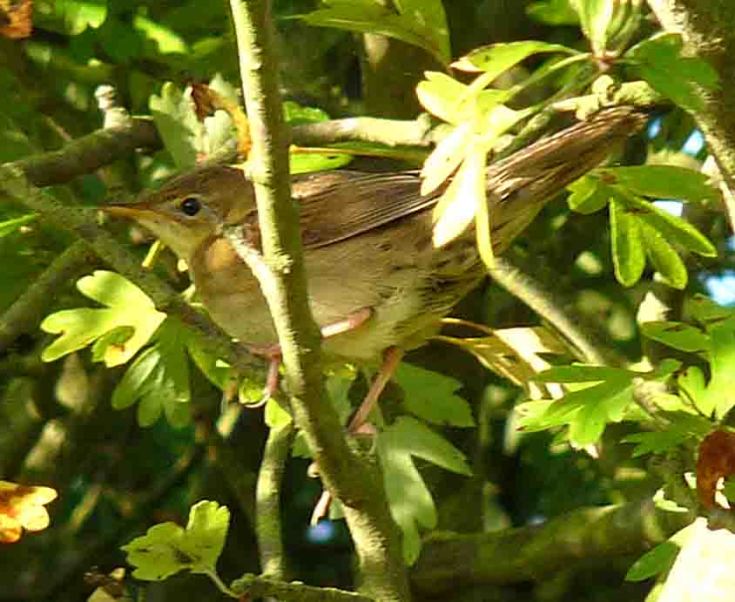 22-25 September 2009 Most of my time at work has been spent cutting either in a tractor or using a strimmer.brush cutter. A reward for this graft came in the form of a Corncrake at c3.30pm on 22nd which was running ahead of the tractor tyre before flying into cover on the edge of the field. It showed for a few seconds when I stopped for scan but despite wating until 0530pm did not show again despite me being very quiet and inside the tractor cab from distance. A reserve and Glos tick for me. A few Little Stints are about and the three Cattle Egrets but a smattering of warblers on the 24th was of note, a Grasshopper Warbler being the pick of the bunch.

12-21 September 2009 A busy period, lots of seasonal work to do at WWT and lots of migration. Check the WWT website for the full updates and numbers as it is a lot to write out twice. Highlights have been the general wader watching, the Grasshopper Warbler on the Middle Point wall and an increase in Cattle Egrets. They now number three and were present from 20th at least. A juvenile Marsh Harrier tha Jeremy Squire and I saw through the 100 Acre at 0950 on 12th was of note. A trip to Cornwall 18-19th did not allow any time for birding as I was on Cricket Tour, I did hear a Yellow Wagtail over Wadebridge though. Here is a selection of images from this period. 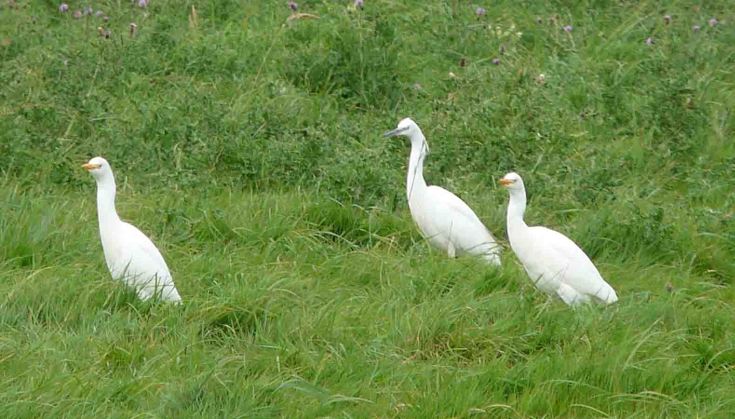 Wheatear on the Dumbles MJM

Skylark with deformed bill on the Dumbles

11 September 2009 Lots of Buzzards over Whitminster and Frampton todayand a light passage of Meadow Pipit.

10 September 2009 At WWT there did not appear to be any new birds about, late news of a phalarope sp off Middle Point @ 1100 came through this morning which was a shame because JSL and I were there at the same time and could have seen it if we had known. At lunchtime the small waders were distant but a juvenile Curlew Sandpiper was present which was probably the white-rumped wader we saw yesterday. A Spotted Redshank was seen also and NRS and we saw a large long winged juvenile  falcon go over us and head N.

We were working in the Rushy today where JSL saw an unusual warbler in the bushes around 1130 by our compost pile. We staked it out and got some images and very good views, a number of people came to have a look at this intriguing bird. It has to be said that it is hard to get field views unless scoped to rival the images that have been collected, see the WWT/Gloster Birder website, Simon Mackie shots. It was between the In Focus Shop and Martin Smith Hide. 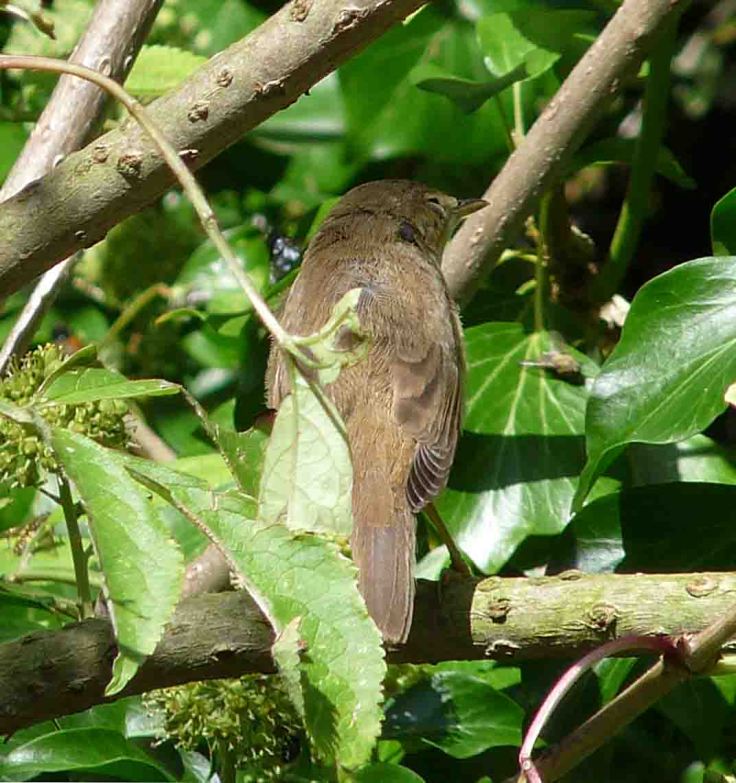 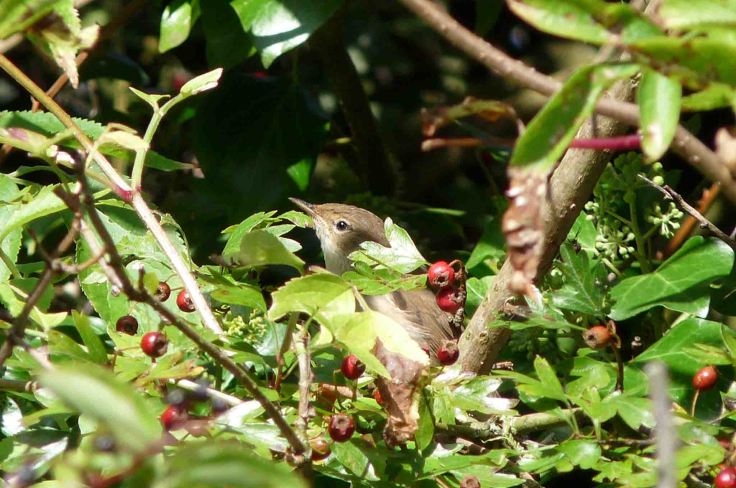 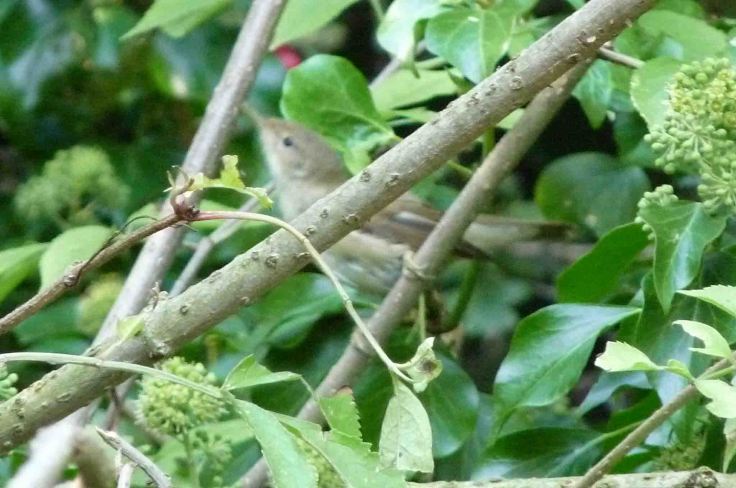 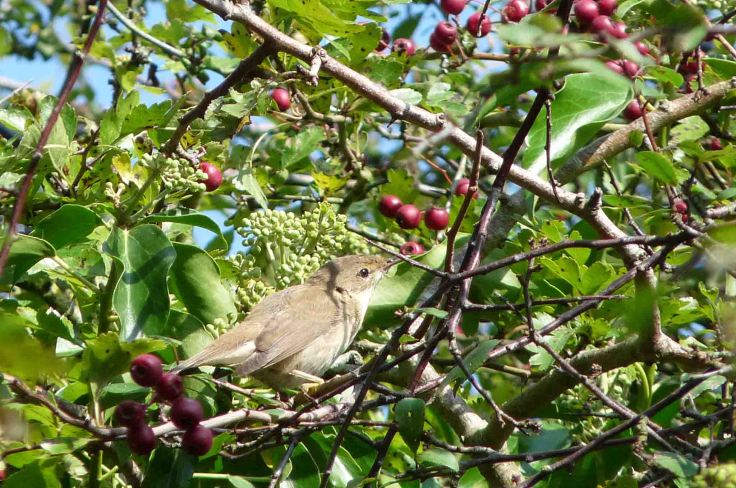 Next three of Reed Warblers MJM 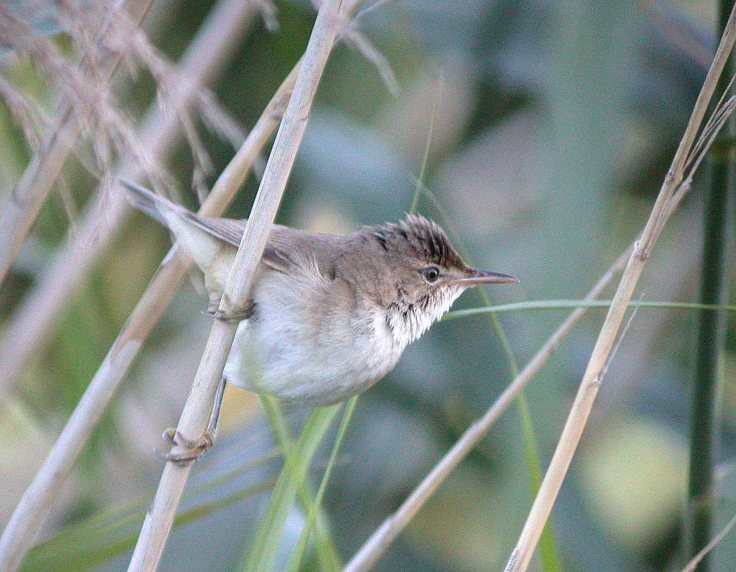 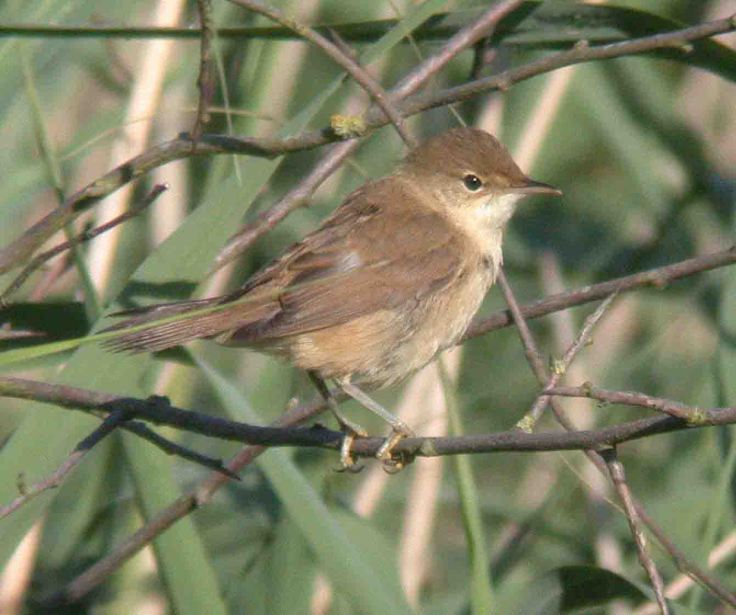 9 September 2009 Had an early start at 0630 and was out mowing by 0700,  a Spotted Flycatcher around the bushes by Knott Hide and three Bullfinch were noted plus a flyover Yellow Wagtail. 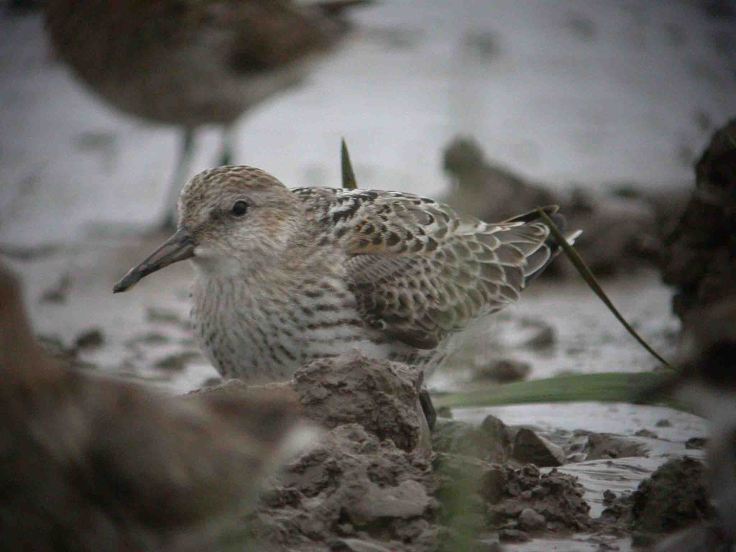 8 September 2009 Some new waders arrived at WWT on the estuary but still concerned mainly three species, Ringed Plover, Dunlin and Sanderling (only four).  The scrapes were roughly the same with a juvenile Ruff being the only new bird that I could see this morning. JSL, MY and I went out to Middle Point to spend our break over the tide with the intention of photographing Dunlin and Ringed Plover.

JSL and I led down and Mike stayed in the Landrover as the Dunlin and Ringed Plover came in with a few Sanderling. As the tide was reaching it’s peak I was hearing an unfamiliar wader call withing the flock flying around, I nearly mentioned it to JSL but we were trying to be quiet.

Various birds were dropping in and flying off or running off with the tide flooding but a group landed close by which made for a decent photo attempt. JSL was snapping away and I whispered that a grey bird had arrived, he had noticed it too. I started taking pics of it as I was very interested in it’s plumage. Features of WRS plumage are apparent but it had some dark splodges on either side of the breast which was confusing as I certainly have not seen on juvenile White-rumped Sandpiper before. It did have other features pointing to WRS but but this is nagging at me as it is only present on Dunlin. It moved to a nearby shelf where realising the time we had to go back in for a meeting. As I got into the Landrover I saw the bird again with the Dunlin flock and it stood out like a sore thumb, I scoped it from the wing mirrow but we were out of time and had to go, we simply did not have any break time left. Due to time limitations and the fact we were both using cameras rather than bins and scopes we did not see it fly and missed wether it had a white-uppertail in the field.

7 September 2009 The clearout of longer staying migrants was still in evidence but a Wood Sandpiper that DBP found on a Landrover safari on Saturday was still about, Snipe, Greenshank and Teal numbers are increasing and Green Sandpipers are about in good numbers for September too.

Best bird was either a juvenile Spotted Crake that I spotted whilst we were working or a suspected juvenile White-rumped Sandpiper. Despite searching for the crake we could not relocate it and had a good look today (8th) also but did not see it, it was not viewable from any hides and was easily disturbed. 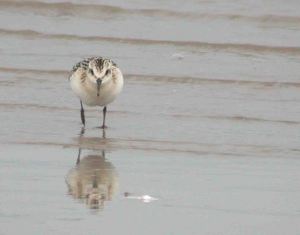 As for the sandpiper, I pulled up at at Middle Point with JSL and clapped my binoculars on the assembled waders, within seconds I was shouting White-rumped Sand and climbing out to get my scope on the moving waders, JSL was also scoping alongside and but I was dissapointed not to get on it, neither did he, I could only see a greyer Dunlin so we left the birds to take some images of the Ringed Plovers. 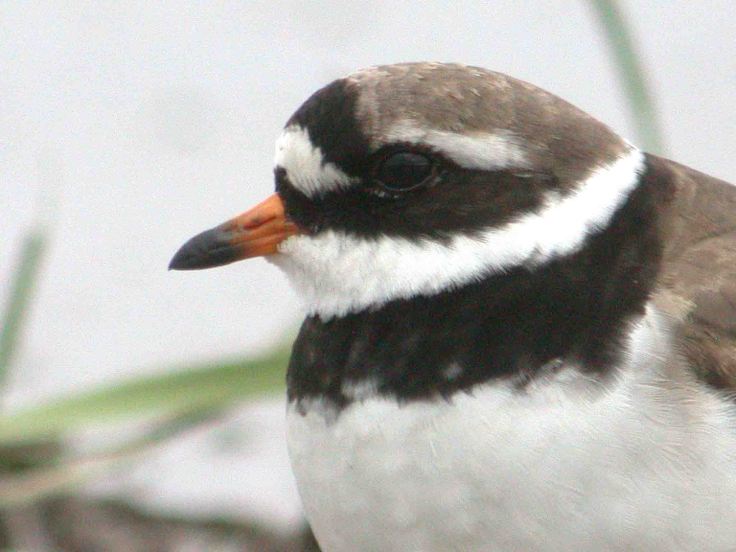 4-6 September 2009 Some decent birds about of which all are listed on the WWT website. Seven Buzzards over my house on my days off were typical for September.

3 September 2009 Still 2+ Curlew Sandpiper at WWT on the estuary, the small waders popped into the Top New Piece with a Little Stint and this site is holding plenty of waders and over 300 Teal. DBP found three White Wagtail among the Pieds. I saw the Cattle Egret in the 50/100 Acre/Bull Ground boundary. A Turnstone and all the small waders inc Curlew Sandpiper were viewable from the Hide at Middle Point at 1630.

2 September 2009 My first3  juvenile Curlew Sandpipers of the year, an adult gull showing the charcters of Baltic but discovered at dusk so the camera could not get the image.  Spotted Redshank, 4 tern sp,and 30 Knot were also notable. Most waders roosted in the Top New Piece.

Probable Baltic Gull WWT MJM
It is the bird in the water, Istudied on the mud for ten minutes before it walked in and floated off, it was getting dark and the camera could not cope. Through the Swarovski scope (great at low light) I could see it well alongside 100’s of graellsii. It was smaller in structure, very long bright yellow legs (brighter than any others near it), black back, darker than all others around it, very long wings, small mirrows, overall a soft more common gull look about it. Always think it best to mention birds like this rather than forget it just for the courtesy of fellow birders. 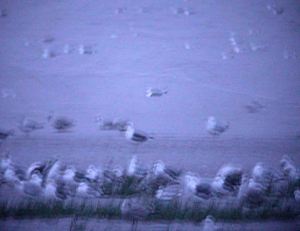