All images M.J.McGill unless stated. 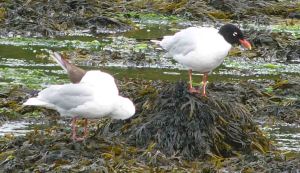 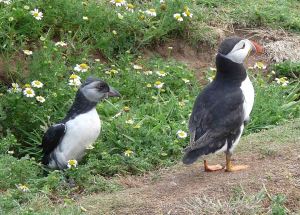 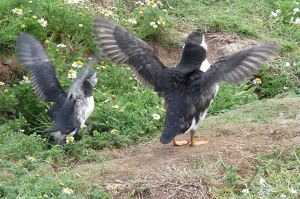 We set off for the south west of tip of Wales at 0700, a stop at a service area was taken en-route afterwhich we headed for St David’s for an hour to explore the ‘city’ and get provisions for lunch. Our first stop was at St Justinian’s for a walk along the cliff top to view the sound across to Ramsey Island. We noted a number of common passerines, Raven and many distant Gannets. After half an hour of birding we set off up the road to stop at a place where Neil had found a Whinchat and Grasshopper Warbler. The ‘Gropper’ was reeling well atop a gorse/furze bush despite being pushed off by a Common Whitethroat on many occasions. We were pleased to find c10 Dark-green Fritillaries among the many insects. A Stonechat sang from a telegraph line, yet another good half an hour, we were then off for the short drive to Dowrog Common where we spent a very pleasant couple of hours. The common was dry but the streams still flowed, a Brown Trout was viewable from the bridge and at least four Golden-ringed Dragonflies, a male Keeled Skimmer (briefly by me), Common Blue and Banded Demoiselle Damselflies. The flora was excellent. Reed Bunting, Sedge Warbler, Meadow Pipits were all seen. A stop on the beach for a tea/ice cream en-route to Goodwick to check in to our respective accommodations was much enjoyed and back out for an evening seawatch at Strumble Head. We estimated 6,400 Manx Shearwater past in 30 minutes and noted auks, Kittiwakes, Fulmar, Gannets and Shag. We returned for an evening meal and to retire for the evening.

Breakfast was taken at 0745 and whilst loading up and waiting we had Goldcrest, Coal Tit and a pair of Spotted Flycatcher feeding young outside the Fishguard Bay Hotel, a Crossbill flew over. The early start was to get ready for a direct drive to Martin’s Haven and to purchase tickets for Skomer Island. After doing just this we explored the Deer Park above the cove where c20 Dark-green Fritillaries were seen. On the headland a pair of Raven, a family of 5 Chough and a few Wheatears were all very welcome. We eventually dropped back down to the boat departure point to wait, more views of Chough and then board the boat, we arrived at 1200 and after a talk by the Warden Chris began our way to picnic in the shelter and then explore the whole island. Puffins, Guillemots, Razorbills, Fulmar in large numbers in the haven, after lunch we were watching a young Short-eared Owl near the farm and at the Wick great intimate views of Puffins with chicks, fish in their bills, flying and walking among us. The sheer cliffs were home to rows of seabirds. A long walk around the island was rewarded with a family of Raven and Chough all playing the updrafts. A Peregrine was seen by Jill and Trevor. A full day of great birds but it had to end so we returned directly to our accommodation at the end of the day having enjoyed a very warm sunny summers day.

On the Sunday morning the weather had changed, very windy and overcast with showers but we had good cover in the form of the Strumble sea-watch shelter. After a session looking at the shearwaters in particular we headed for another site to look for Black Guillemot which we found. After this great bird we headed for WWT’s National Wetland Centre of Wales where we had lunch and spent the whole afternoon birding, highlights were watching the juvenile Black-headed Gulls from and in the colony, c30 Mediterranean Gulls mostly adults, c70 Black-tailed Godwit, a pair of Bullfinch on the feeders along with Jay. This was our last port of call before reaching Whitminster at 17.30 and concluding the trip. Thanks to all who attended for your company and enthusiasm.

A species list of the birds we saw was kindly compiled by Trevor Blythe.