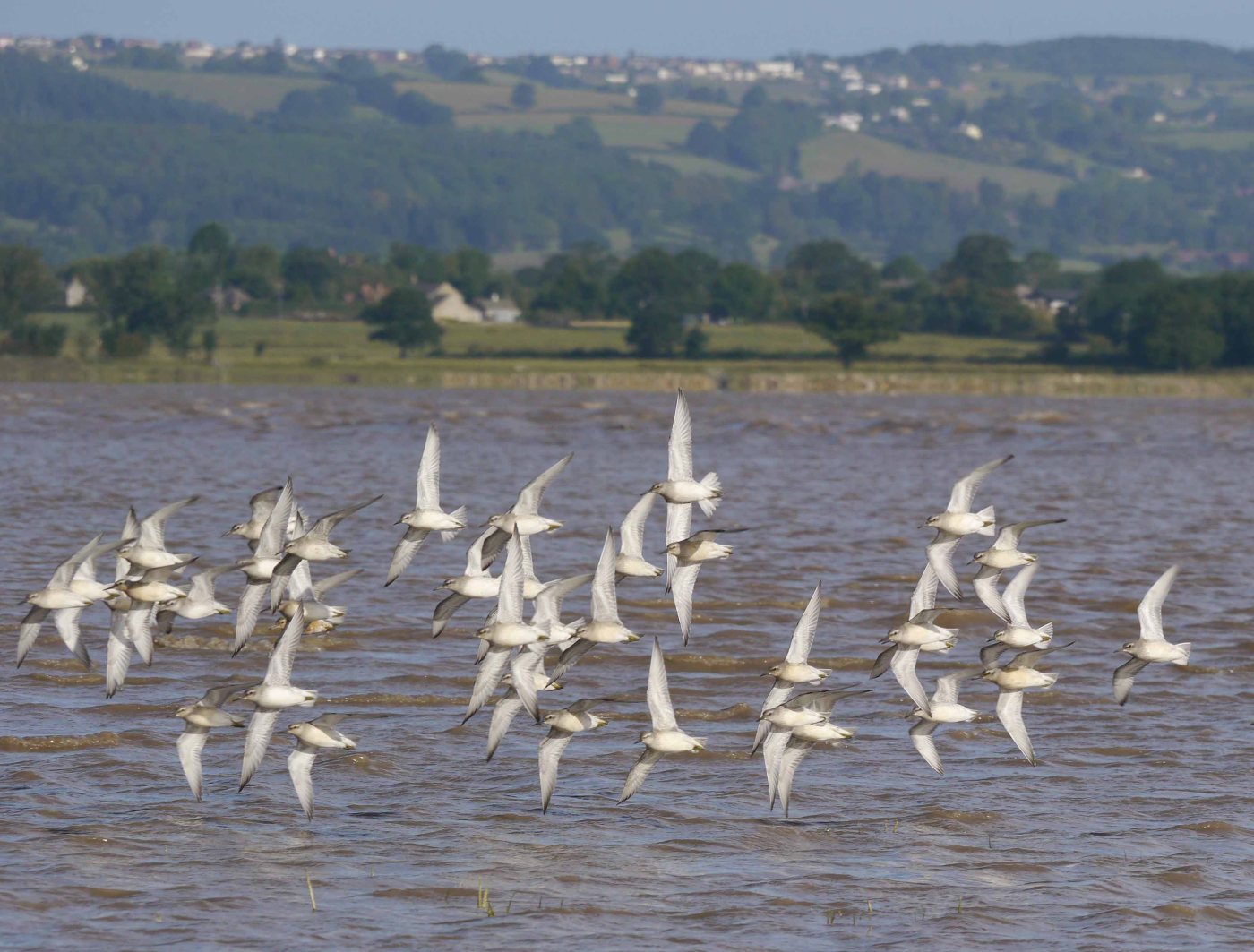 22-30 August 2011
During this period locally I have seen a number of migrants and offspring from the breeding season. The wader variety has increased and highlights have been my first juvenile Curlew Sandpiper and Sanderling on 26th with up to five of the former and nine of the latter by 29th. It is a great time of year with so much to see. Anything can show up and does…a juvenile Marsh Harrier on 23rd hunting the Maize crop at WWT was a nice start. I went and had a quick look at Dave Paynter’s Wryneck at Sharpness on 29th and on the morning of the 30th the first bird I saw from the Zeiss Hide was an Osprey flying down river. Other notables from 29th was a juvenile Cuckoo and 2 juvenile Hobbies.

Red Knot over the Severn
Most are not red, only the one in this image but there is a range of subtle juvenile plumages. 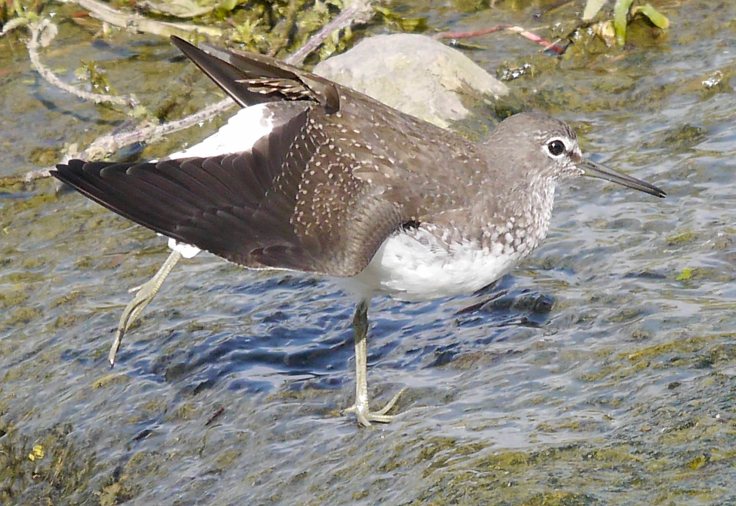 Redstart
A good run of records from the trust during the whole period. 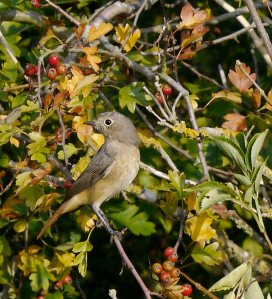 21 August 2011
Lots of birds seen whilst unlocking the hides and two Landrover safari’s. The Cuckoo was a good late record, juvenile Spotted Redshanks are very smart birds and three Little-ringed Plovers. See http://www.wwt.org.uk/visit-us/slimbridge/wildlife-sightings/todays-sightings-20110821-162400 for the roundup.

20 August 2011
A Common Whitethroat and Willow Warbler in the garden this morning…nice. A day at the British Birdwatching Fair…nice to catch up with so many of you.

17 August 2011
Two Chiffchaffs spent all day feeding my garden, they breed locally but these are passage birds.

15-16 August 2011
I have been beating the garden into shape, I have to catch up with lots and may be doing lots more this week. A juvenile Robin and juvenile Sparrowhawk are the only obvious birds about. A good breeding season for many birds that nest at my home but they are spending more time in the adjacent fields of wheat and hedges.

13-14 August 2011
A weekend!!! two days of playing cricket for Whitminster CC with the wrong results…lost both.

9-13 August 2011
A trip to stay in East Dorset near Wimborne to spend time as a family. We did lots of fun stuff but I also got to have a brief look and walk around some new wildlife sites. Ibsley Water was packed with birds, I saw at least 40 Egyptian Geese here, I did not realise they were this common  in West Hampshire. A male Red-crested Pochard was also present with a few Common Pochard and lots of Little and Great Crested Grebe. A Black-necked Grebe and Great White Egret had been reported too. We had a stroll around Holt Heath in Dorset, excellent site with some of Britain’s rarest reptiles such as Smooth Snake and Sand Lizard. Dartford Warbler also present and the only site in Dorset with breeding Curlew. A walk up onto Bindon Hill near Lulworth Cove was breezy but worth the climb, lots of Chalkhill Blues but a little late for Lulworth Skipper. A cycle ride around Moors Valley CP was also much enjoyed but the wrong time of year for really productive woodland birding. Some old favourites were also taken in from this lovely part of England…Stonehenge, Mudeford Quay and Bournemouth beach. A visit to a Lebanese restaurant called Retro, Bournemouth was the foody highlight, excellent grub.

8 August 2011
An afternoon at WWT Slimbridge to attend joint celebration of the Spoon-billed Sandpiper project so far. Nice to see so many WWT staff present.

31 July-4 August 2011
A week back to work at WWT Slimbridge. The Spoonbill, 2 Garganeys, Wood Sandpiper and flocks of waders on the scrapes all very welcome. 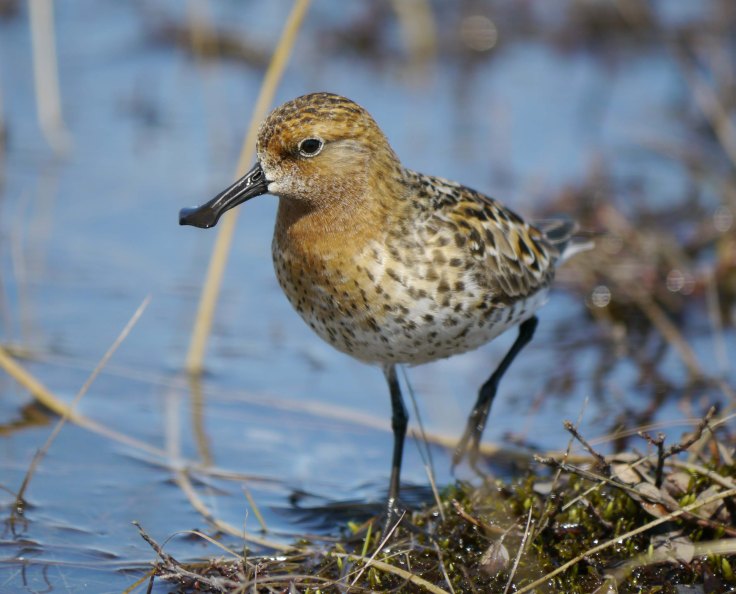 28/29 July 2011
Still just spending time at home and feeling the strains of a cricket practice session on Wednesday night, stiff from bowling. I have not been away from the garden but have to say that the Swallows and House Martins are a pleasure to watch and listen to. I have been seeing Swifts daily until 28th at least, they will dissapear soon.

27 July 2011
I spent most of the day out with my family, we visited the magnificent Forest of Dean for a picnic and a walk. I checked out a dragonlfy pool first at Edgehill, Emperor, Southern Hawker and Emerald Damselflies all seen. A Whitethroat scolded me. Our picnic spot at the Speech House arboretum was very quiet for birds as adults are moulting and juveniles are not wanting to attract attention. A walk around Cannop Ponds was productive. The water was attracting a lot of birds to bathe and drink. Blackcaps were calling, juvenile Marsh, Blue, Great and Coal Tits all seen. At least 4 juvenile Grey Wagtails, three juvenile Siskins, a GSWoodpecker, male Bullfinch, c20 secretive, moulting Mandarin, a Silver-washed Fritillary floated by. Pick of the lot was three juvenile Crossbills that had come to drink.

21-26 July 2011
My time has been spent trying to get back on track, catching up with sleep and spending time at home. A Hobby over Whitminster school was a bonus on 21st.

20 July 2011
I have returned from what has been a succesful expedition to Chukotka, Russian (Far Eastern Siberia) to collect and hatch eggs of the critically endagered Spoon-billed Sandpiper.