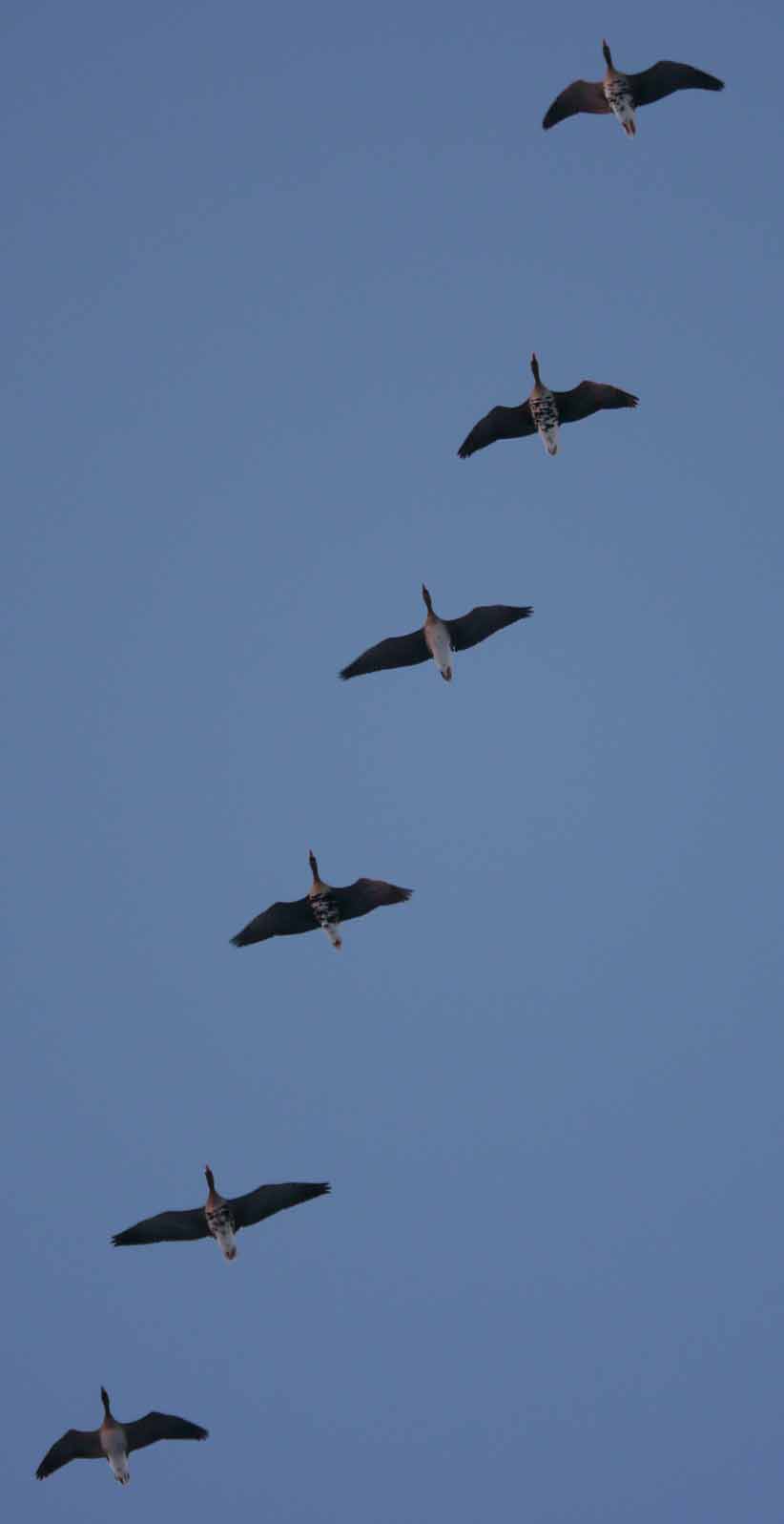 A visit to the Netherlands in winter has been on the cards for many years, an attempt to get a trip going in 2010 was thwarted by severe weather conditions. It was time to go for it again so a rather late advertised trip was arranged, a team of hardy souls committed, it was all systems go. The coldest and worst winter weather was again forecast but it still looked good. Six of us met at Whitminster, I picked up Jayne and Rich and Bob collected Bettie and Anne en-route to me. We then collected Tom who had booked just a couple of days before. A few Red Kite were noted on the way to Folkestone, the Eurotunnel was as efficient as ever and we were off heading through France. The snow bound fields helped us in seeing three Woodcock flying across the road to drop into ditches plus the bizarre sight of a Little Grebe flying down the motorway. A stop in Belgium for comfort and coffee allowed TM to seek out a couple of Crested Tits and a Short-toed Treecreeper.

We negotiated the heavy traffic around Antwerp and Amsterdam and arrived near Oostvardersplassen for a spot of birding. A rough hay field obviously held a lot of voles as 4 Buzzard, 2 Kestrel, male and female Hen Harrier, the male of the latter as always, a stunner. Two Great White Egrets also foraged with Grey Heron for rodents. A few minutes down the road and we were sifting through a flock of 3000 geese, Tundra Bean, Barnacle, White-fronted and Greylag and then a white phase Snow Goose joined them. A roost of 600 Stock Dove was very impressive. We headed to our Hotel, the Vigilante near Makkum arriving at 1930, very comfortable, very quiet and excellent food.

We had breakfast at 0715, I have to say it was excellent and we were in the car by 0800. Sunrise on a nearby dike just south of Makkum allowed us to watch tens of thousands of Barnacle and White-fronted Geese leaving the Ijsselmeer roost (on the ice?) and head to the fields for the day. Wonderful watching plus Hen Harrier and a female Goosander searching for open water. It was cold, the night saw -10 temperatures and geese foraged anywhere grass was not snow covered. Some birds were very tame, others skittish. 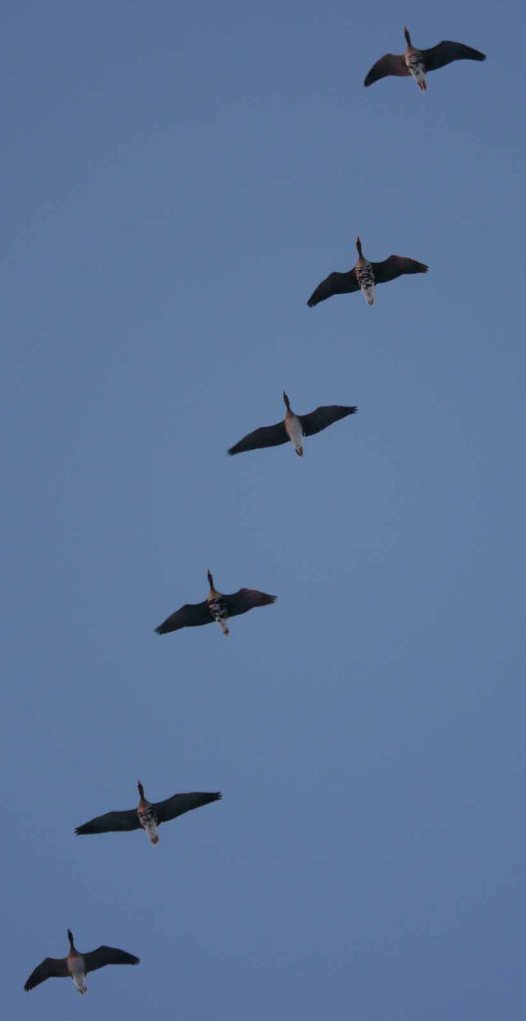 Driving slowly along the lanes toward Ferwoude we found a monster flock of geese, c7000 and got into a good position to go through them. They were up and down all the time but most came back to the same spot. I picked up a presumed Barnacle x Ross’s or Snow Goose and talked everyone onto the bird. Whilst doing this I saw a 2cy Red-breasted Goose hiding among the Barnies and Fronts. I gave directions for that bird and scanned back to find the hybrid again this time locating an adult Red-breasted Goose in the same flock. A great start to the day.

Red-breasted Goose among the Barnies (rear view when it dissapears and head-on, easy)

The ditches were frozen solid, every sluice had a Heron or if a puddle of water was available, a collection of duck. The flat open landscape was dotted with wind turbines and huge flocks of geese could be seen all around. The plan during the day focussed on looking at as many flocks as possible. We carefully followed any large gatherings stopping to scan any grounded flocks. Many were close to habitation, where grass was available in the lee of buildings. One particular flock of White-fronts and Pinks had two neck-collared of each and a re-visit gave up a probable Lesser White-front x White-front hybrid. A dark, yellow eye-ringed, pink billed and sweet looking bird but too big. This flock was so close Russian White-fronted Goose variations were prominent, yellow and white eye rings, extensive white frontal shields extended to top of the head and variations in shades.

It was apparent that a large scale skating event was underway, thousands of people skating the ditches and canals between each village, heads and shoulders glided past every goose flock in every direction. Cafes had been set up on the ice with open for hot chocolate signs and plenty of customers. Anne Nuttal did a little research and provided this info….

Incidentally, I had a look on the internet to see if  I could find out more about the skating event.  Apparently, if conditions  are right, on that w/e there is an annual race called Elfstedentocht — it  is a route of 200 km on canals connecting 11 cities — but it hasn’t happened  for 15 years.  There were hopes that the ice would be strong enough  this year, and the canals on the route were swept clean in  preparation.  However, it seems that the ice in the southern  part of the country was not thick enough, so the actual event didn’t take  place, although as we saw, many skaters were out.  I saw Jake King last  night, and he knew about the race because a Dutch neighbour of his had gone over  to take part in the late 1990s, which seems to confirm the information we had  gleaned.  (I know this isn’t about birds, but I thought you might be  interested!)

We stopped at the picturesque town of Workum for a coffee and bite to eat. Aftewards whilst driving out we stopped to scan a roadside canal with open water. A few female Smew and Goosander pairs allowed close approach and a ‘white nun’, a male Smew was to be seen further along the canal. We had been seeing Buzzards everywhere but we bumped into a juvenile Rough-legged Buzzard that gave us good views as it hunted. More goose searching ensued, great views and plenty more flocks culminating in an area with 20,000 geese gathered for a pre roost. Most were Barnacle Geese but the ‘Fronts and Pinks’ were ever present.

Heading North we stopped on the dike near Zurich for a search of open water on the sea. Big flocks of Wigeon and Curlew dominated but many other wader species were noted and sea-duck. Over 70 Goosander, 20 Smew, a Greater Scaup and Pochard and Tufted Duck were found. A loo stop nearby and we stopped at Harlingen harbour for the sunset and to search, a few Goosander and Smew were found with Little and Great Crested Grebe. Returning to Makkum we chanced on a flock of 4000 White-fronts which were close, scanning as the light faded revealed a Dark-bellied Brent and Pink-footed Geese, this group deserved a second look in daylight. We got back to the hotel in the dark.

Again we were greeted by a stunning sunrise and -10 or more temperatures. Soon after setting off I slowed to look at a few geese and duck on an area of 30 feet square open water next to the bridge. A few Smew and White-fronted Geese were among the gathering and I noticed a Reed Bunting feeding on phragmites seed heads. Another bird caught my eye, rufous and blue…it was a male Bearded Tit, one of those birds you always enjoy watching and this one fed in the open and for the whole time we were with it. This was in sunny, calm conditions. Across the bridge a female Smew and male Goosander fished close by.

Sound start but we had to ignore the goose flocks as best we could but a stop and search of yesterday’s White-front flock gave us three Tundra Bean Geese, lots of Pinks and of course excellent sunny views of the other two common species. We had to head onward to Anjum and the Lauersmeer, an hour or more driving further North up the coast and we arrived at the heavily frozen lake. It was pretty clear that the harsh weather had an impact on the birds, goose numbers were in the thousands but not as many as expected, no sign of White-tailed Eagles, only Buzzards on the ice and around 30 Hooded Crow, Fieldfares, Sparrowhawk and Hen Harrier were all we could muster. We headed for the coast and harbour of Lauerswoog, a good move as coffee, loos and birds were all on offer even though the cold wind had to to be braved. Large numbers of waders gathered at the ice free area at the port, many looked to be be struggling. Dunlin, Purple Sandpiper, Redshank, Turnstone, Oystercatcher and 1500 Brent Geese were found as were large numbers of Dutch folk out to photograph the frozen sea.

The icebergs and floes had 3000 Pintail, 1000 Shelduck and more duck species roosting upon them, open water Eiders, Goosanders and Smew and around 40 Goldeneye were also seen. Back in the car and a short drive to the Brent Geese. Amazingly close views of them were achieved as they grazed the grassy banks. A couple of Light-bellied Brents were feeding among the commoner Dark-bellied.

We used the coast road passing through many villages (Paesens, Wierum and Holwerd) and stopping for birds. 1800 Barnacle Geese and possible Twite were seen as well as 70 Skylark. At Holwerd ferry terminal we saw a flock of 45 Tundra Bean Geese on the ploughed fields and over the dike to the coast the sight of so many clsoe birds. Flocks of waders and Shelduck fed in the one open area. We, along with the many Dutch folk walked down onto the thick ice and found the birds to be totally tame, they were oblivious to our presence at they searched for food.

Amazing experience to be with the waders but we were here to look for passerines, we did see 15 or so Scandinavian Rock Pipits and scanning the saltmarsh two Merlins. It was time to head back to Makkum for the night, a hot shower and beer by the fire. 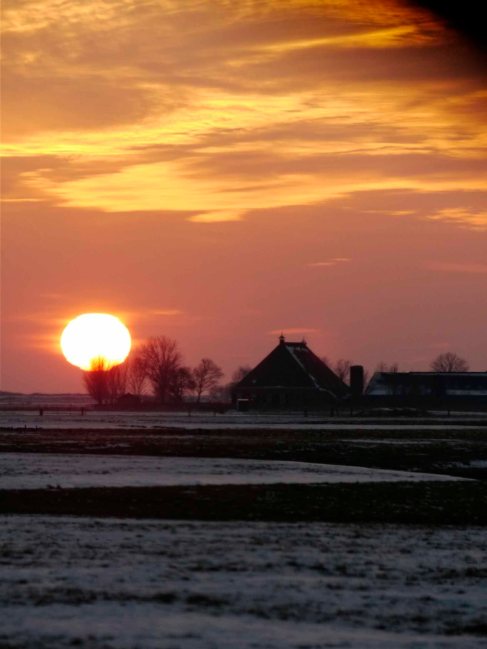 Packed and ready to go in the morning we had a hearty breakfast and got going. The previous nights plan was to try and see Lesser White-fronted Geese and if time allowed look for a wintering Gyrfalcon near the Belgium border (not possible in the end). Our extensive search on the Petten/Camperduin area proved to be very goosey. A flock of 1300 Brents were found and one field held 4000 geese, in this gathering we had Pink-footed, White-fronted, Barnacle, Tundra Bean, Dark-bellied Brent, Greylags and BR located a small Canada Goose. A nice piece of scope work, well done Bob. Studying the bird it was accompanied by a Barnacle partner and a Canada x Barnacle hybrid. The canals had Smew, Goosander and diving duck, flocks of Wigeon and Teal all thanks to the icebreaking barge. The ‘levels’ had hunting Hen Harrier and a flock of Grey Partridge. We tried to get close to a distant flock of geese but were flushed by a dog walker on our arrival.

Checking the clock, it was time to go, a four hour drive ahead with thousands of geese seen en-route, in Alkmaar a Woodcock flew across the road not far from the AZ Alkmaar stadium. We drove through a few snow flurries and arrived at the Channel Tunnel mid afternoon, boarded thus ending our birding. A magic trip, so many birds and great views.

A link to Tom Mabbett’s blog, includes a great shot of the Red-breasted Goose.