Seawatching is one type of birding that can be favoured by the birding community indeed loved, in some cases it is rather hated, when the weather looks right and delivers it can be amazing. After keeping a close eye on a a weather system that was due in it was becoming clear that it had potential. A number of friends were getting rather revved up about the forecast for Saturday so I decided to offer a day  trip to give it a go. We left at 0400 arriving at Marazion Marsh just as a rain shower began at 0715. A quick search of the area and we were all soon watching a Spotted Crake below us as it fed around the edge of a small pool. Two were being seen here by the end of the day and this bird was nice detour. 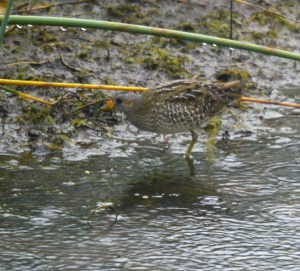 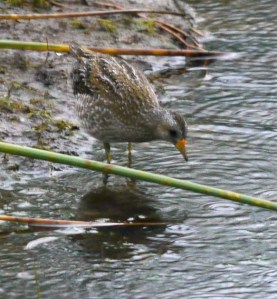 Basking Sharks– One of the main highlights of the day was the constant views of these gentle giants as the filter fed in the sea below us. At least six were seen at any one time, often very close to shore but I came away feeling that at least twelve were present, other estimates ranged to 16. We watched three together feeding in a line at one point. Other interesing creatures included various Ocean Sunfish sightings, Grey Seal, Harbour Porpoise and for some Bottlenose Dolphins.

We settled at Pendeen Watch Lighthouse as the wind forecast was most favourable for this site. Many friends and familiar faces were gathered and our group spread out among the 60 or so gathered to start scanning. I moved to a few spots for best comfort and was joined by Ruth, Jeanne and Graham with Colin also re-appearing towards the end of the 7 hour watch. Paul and Rich stayed below the wall with the main group which is also wherePaul Marshall was camped. The food, flask and extra clothing were all needed as it rained many times but everyone stayed for the duration. We all saw nearly all the species and individuals noted by all seawatchers, some fo the large shearwaters were not so easy to get on to but with more practice this will become easier. The winds did not quite reach the forecasted potential but it still worked out well. The totals from all of the group were ranging from 4-7 Great Shearwater, 5-8 Cory’s Shearwater, 2-6 Sooty Shearwater, 10-14 Balearic Shearwater, 2000+ Manx Shearwater, 2000+ Gannet, 4 Kittiwake, 7-10 Great Skuas, 9-14 Arctic Skua, 1 juvenile Long-tailed Skua that Graham picked up first appeared in front of us, it gave excellent views passing close along the cliff. Flocks of Whimbrel, Sanderling, Turnstone, Dunlin, Oystercatcher, tern sp, Sandwich Terns and Common Scoter were all welcomed to the tally.  Other species noted by seawatchers included Pomarine Skua and a few Storm Petrels. It was a fantastic day, hard work in the rain at times and not quite ideal. Despite this I think everyone would do this again but I will try to ensure the sun is shining next time.