21 February 2014
Another visit to the Cotswold Water Park to see the Smew before they left. I was pleased to see the ‘set’ , four males, two female and a first winter male. 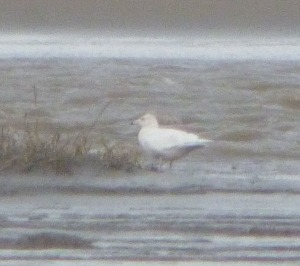 This bird was initially spotted by John Phillips, it remained around the estuary for many weeks but never gave me close views. This ambitious effort taken from the Holden Tower.  I never got to age it with such poor views, it was a first or second winter. Maybe the CRC will get closer images submitted showing the plumage detail and eye colour.

A Tundra Bean Goose flew in and fed on the Dumbles as did a particularly large, pale Greylag. This made five of these hulking birds on the saltmarsh.

At least three Little Stint wintered around the Severn with the newly worked over scrape on the Dumbles being the most reliable place to see them.

Conducted the monthly Wetland Bird Survey at WWT Slimbridge, the high water levels turned up a few good birds including Water Pipit, Short-eared Owl and Greater Scaup. As I predicted it turned up later on the Rushy and stayed for a couple of days. 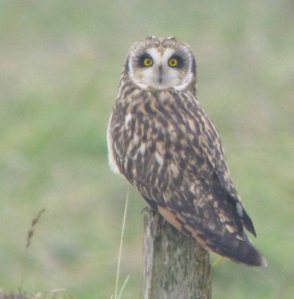 January 10 2014
A visit to the ‘no entry’ capital of Gloucestershire produced a Kumlien’s Gull. See blog post about it. 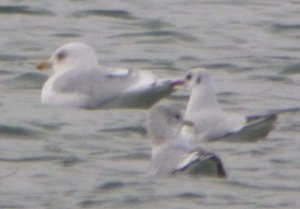 The Green-winged Teal that I saw at the end of December may have been the same bird as depicted below however it did not strike me as being the same bird based on the vertical stripe not being so bold. Perhaps this bird was a second individual? This bird was also on the Tack Piece following a day of no sightings of any GWTeals despite searching. With c5000 of these little ducks in our area this winter I would not be surprised if there were more.