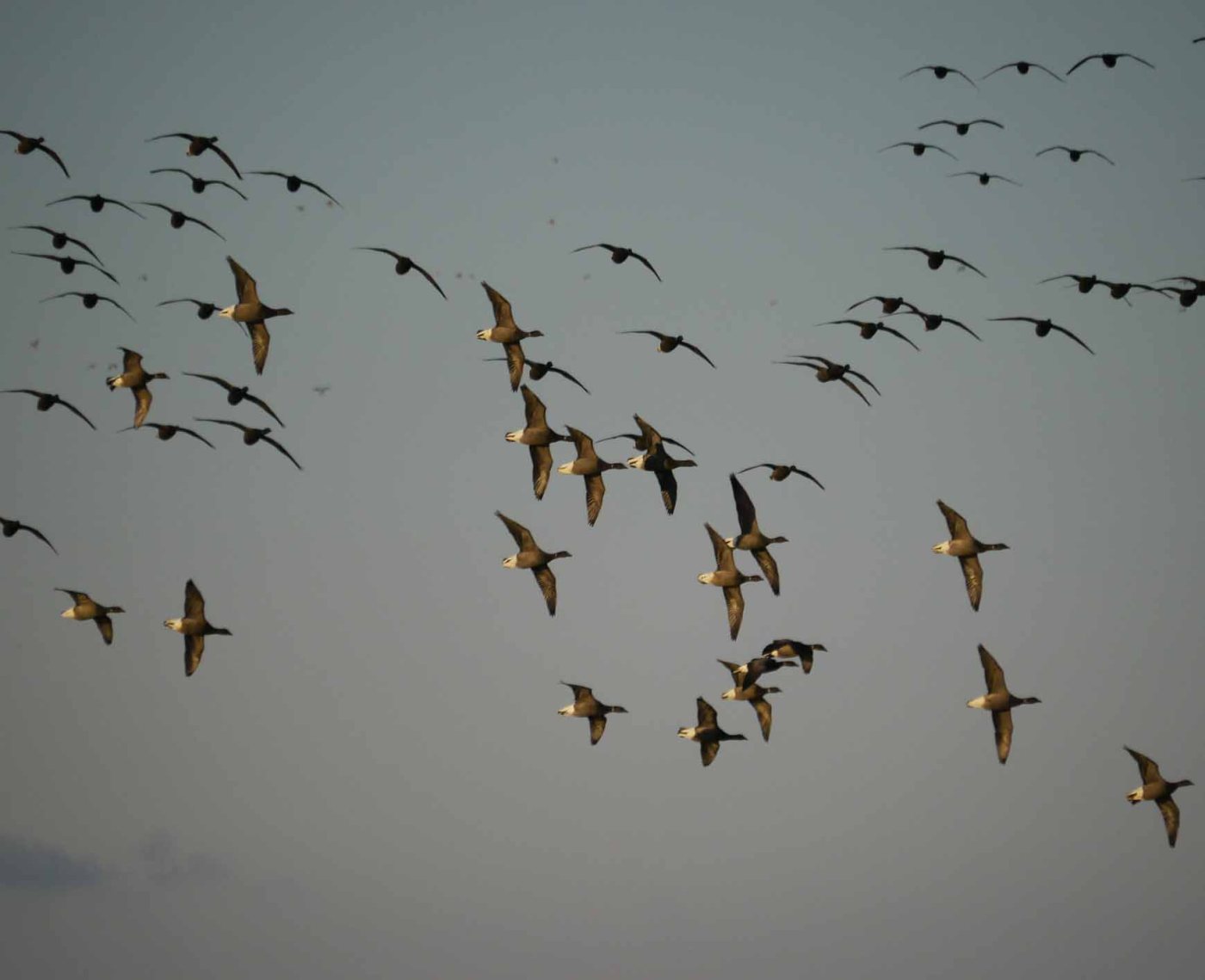 The fine forecast for the few days that we visited the east coast played out correctly, non-stop sunshine, even  I was wavering on wishing for overnight showers. A reasonable run up to Lincolnshire partly in fog with a stop on the way saw us arrive at Gibraltar Point NNR. The windows were down on the car as we cruised toward the car park, a Yellow-browed Warbler called along the way!

A party of noisy Pink-footed Geese arrived from the north and continued south looking spectacular in the sun, a few Siskins and Meadow Pipits passed over in the same direction. As it was midday, drinks, a bite to eat and the opportunity to use the temporary visitor centre facilities was taken. Our first stop was to seek out one of the five Yellow-browed Warblers that was present, one chap had seen three together. It wasn’t long before we were watching one of these little gems as it skipped through the canopy of a very mature sycamore. It also played chase with a Pied Flycatcher, such is the magic of migration.

A variety of common passerines were noted in our search for more Yellow-browed Warblers. Stiff necks forced moving on to the wetlands we all got amazing views of 5 Spotted Redshank that seemed very reluctant to leave each other’s sides. In addition three Greenshank, a couple of Black-tailed Godwit, a party of feeding Avocet, a Lapwing flock (70) and even larger flock of Teal (200) with Wigeon made the site much busier. A single Snipe sunned itself. One or two Chiffchaff were heard plus overflying Linnets, at the next hide and pool within the dunes we added a showy Goldcrest, more Teal, Wigeon and Pochard to the day list. A Kestrel was ever present and it was nice to see a flock of Greenfinch fattening up on berries.

The dunes were rather quiet, the warm day was probably to blame. The sea was miles away as it was low tide, not really worth battling with heat haze. Crossing back to the VC via the saltmarsh we took refreshment again before having another search of the wooded area, a few Goldcrests were seen but no further YBW views. It was time to move on and we made our next stop RSPB Frampton Marsh.

As soon as we arrived on the reserve we could see hundreds of birds thanks to the open vistas. Making for the 360 degree hide we had excellent light and lots of birds, large numbers of Teal and Wigeon, a few Pintail represented the ducks. Golden Plovers flew down to the marsh in numbers and looked brilliant in the sunshine. A few Snipe fed in sheltered spots and c20 Black-tailed Godwit probed belly deep in the mud. Whilst scanning the back of the marsh I noticed a Jack Snipe as it whizzed through my binocular view only to disappear on the other side of the reeds. A Ruff came in with the Goldies.

We left the hide to get on the west side of the marsh and try to relocate the Jack Snipe, a scan of the likely spots and we managed to spot  it, the bird bounced along to whatever tune it was listening to and gave us all good views. As if on demand a flock of Dark-bellied Brent Geese came in from the Wash, circled a few times before dropping in, such marvellous birds.

Strolling down to the Wash seawall we passed a Spotted Redshank, Ruff and a tame Greenshank on the grazing marshes. I returned to the car to bring it down closer whilst everyone else scanned over the area. I saw a Barn Owl near the visitor centre so collected everyone so we could watch it hunting over the reserve as the sun set, perfect.

Staying near King’s Lynn was a good move as it was more central, we had a short journey to end the birding day.

A glorious morning greeted us, we set off at 0730 for the North Norfolk coast, a bank of mist over Roydon Common was burning off, no doubt this also pleased the pumpkin pickers who were busy crating up the autumn harvest. Another short journey and we arrived in the picturesque Cley next the Sea village making straight for the beach. Whatever the weather a short seawatch here will reward the watcher with twice as many seabirds as you usually see during a Gloucestershire gale. A steady passage of Gannets and Red-throated Divers with small parties of Common Scoter and a few Guillemot, Kittiwake and un-identified auks. Wigeon, Teal and Gadwall were also going about their business but one that slipped through the net was probably a Scaup.

A short walk along the beach shingle to scan the marsh was rewarded with outrageously close views of a confiding Snow Bunting. The bird fed a few feet away and even decided to come closer. A nice start to the day which deserved a coffee and cake at the Cley Marshes NWT visitor centre, we passed a hovering Stonechat along the way. 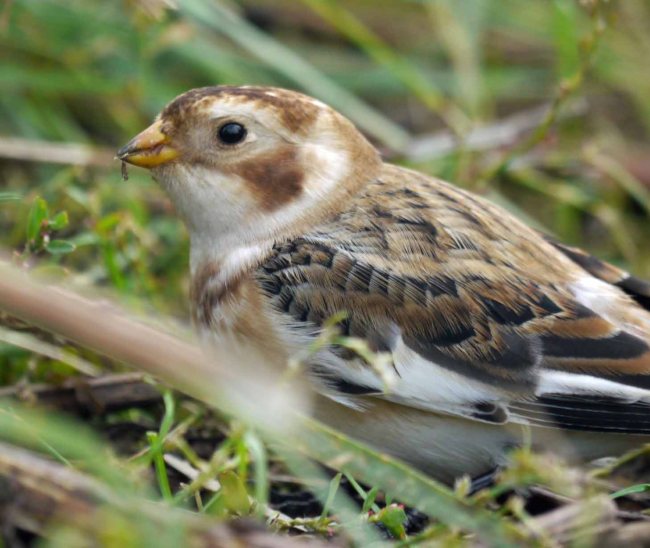 The balcony and indeed the VC  commands great views across the marsh so we scanned the birds to pick out Knot and Ruff among the godwits and goldies. A Red Kite circled overhead which was a bonus. A brief visit to Salthouse beach allowed another short sea watch as well as Skylarks on the pebbles and a few Redshanks on the pools. As per usual we continued along the coast to call in at various sites. Our next stop was at the Wells Woods migrant hotspot called the Dell.

Coal Tits were calling from the pines, Goldcrest doing the same from the thorns, we were very lucky to walk into a father and son who had located a smart Firecrest. This bird showed initially but then gave us a game of hide and seek until we all managed to gains views as it worked its way through the undergrowth and scrub. This area was a suntrap, plenty of Migrant Hawker and Common Darter dragonflies were present.

Next stop was at RSPB Titchwell for lunch (except John B, who walked the reedbed trail) and then to search the area. From the path we scored with a pair of Bearded  Tits that pinged and posed briefly, Cetti’s Warbler called and  another duck-filled marsh greeted us.  On the brackish marsh we saw two Ringed Plover and a few Grey Plover, 15 Dunlin fed in the distance. On the walk back we added a Chinese Water Deer, Water Rail and Kingfisher. We spent a bit of time in the car park looking for the Yellow-browed Warbler seeing plenty of common passerines but not it.

Moving on to Holme next the Sea we searched the scrub and dunes near the golf course but found it to be rather quiet,  a few Chiffchaff and Greenfinch as well as House Sparrows. A final destination for the day was Roydon Common, the heath provided a large gathering Meadow Pipit roost, two Stonechat and Green Woodpecker. It was also a great spot for the amazing sunset before heading back to the hotel.

We departed on our last day a little bit later and once again began with a visit to Cley beach for another seawatch. The Red-throated Divers and Gannets were still on the move but we added Razorbills, Sandwich Terns and overflying Rock Pipits. Reports of a Marsh Sandpiper on the nearby marshes did not come to anything, we had walked past the showy Snow Bunting but this time it had attracted quite a crowd.

Another stop at the Cley NWT visitor centre for refreshment was brightened by a flock of arriving Pink-footed Geese, this was followed by a search of the poolside scrub at Walsey Hills NNT. A Yellow-browed Warbler called a few times but never showed for us, some compensation in the form of a Bullfinch. The still, calm and sunny weather was perfect for seeking out Bearded Tits, the East Bank did not disappoint us, great views of four or more we gained out in the open along with a much sought after Tufted Duck.

We moved on from Cley to Hunstanton cliffs, it was low tide and the Wash was a millpond, Red-throated Divers, Great Crested Grebes were easy if distant to pick out and Bar-tailed Godwit showed among the Oystercatchers on the beach. Two Peregrine scrapped noisily overhead. This was our final stop for birds as we made our way back to Gloucestershire to conclude a good few days, over 100 species were noted in a relaxed birding trip. Thank you to everyone who accompanied me and special thanks for the messages, I am glad you enjoyed it.