27 February 2009 A female Blackbird was collecting nest material in my garden this morning.

26 February 2009 I did the rounds at WWT this morning with Mike Cox, I left him on his last day with us volunteering on Wigeon search duty and he located the male American Wigeon on the Tack Piece. He will be moving on to a new job next week. I counted the other birds and 483 E White-fronted Geese, the Dark-bellied Brent, 2 wild Greylags and the female Goldeneye. I saw four Spotted Redshank on the South Lake also. During the day 2 Ruff were noted in the road fields, three Redpoll over and as we left the track repair job at the end of the day, Mike and I spotted  a Spoonbill from the tractor as it fed in front of the Hogarth Hide on the South Lake.

25 February 2009 No birding as such at WWT but a scan around the 100 Acre whilst measuring up a job gave me a Little Stint, 100 Dunlin, 90 Golden Plover and the Egyptian Goose.  The female Goldeneye was still on the Rushy. A party of 3 Lesser Redpoll, 2 Reed Bunting and 4 Linnet were in the hedges.

24 February 2009 After being off work yesterday I eventually made my way to the Zeiss Hide on the morning rounds at WWT and got some close views of the American Wigeon. At least two of the wild Greylag were on the Dumbles plus the D.B.Brent, 3 Spotted Redshank and 430 E White-fronted Geese on the Tack Piece.

18-23 February 2009 Much the same at WWT but large departures noted within the duck flocks. Graham Clarkson was in the county with photographer Andy Bate and both stayed at my place on the Friday night. They had a good weekend birding in the county with Red Kite at Symond’s Yat plus the Peregrines and a heart stopping Gyr falcon type which they thought to be a hybrid. Hawfinches, Mandarin, displaying Goshawks and lots of other forest birds were noted by them. At WWT, the six Tundra Bean Geese and D.B. Brent were added too plus the Long-eared Owl near Splatt Bridge. I saw the Tundra Bean Geese on Sunday also and the female Goldeneye was still on the Rushy. I saw the first winter Glaucous Gull on the estuary at dusk.

16-17 February 2009 Bruce Pendlebury phoned me with news of a Mealy Redpoll in the Green Lane near to the WWT reserve, it was with four Lesser Redpoll. Today was much of the same, a Little Stint and good variety of other waders were about the WWT reserve. The six Tundra Bean and single Dark-bellied Brent were on the Dumbles late afternoon. Yesterday was notable for a pair of calling, talon grappling Peregrine Falcons over where we logged up fallen Oaks. The bird song continues to increase locally particularly in the mornings.

15 February 2009 13,000 wetland birds counted at WWT today with a first winter Glaucous Gull, the six Tundra Bean Geese and Dark-bellied Brent being pick of the bunch. Three Great-crested Grebe returned and were vocal and displaying, the same could be seen with the Oystercatchers. 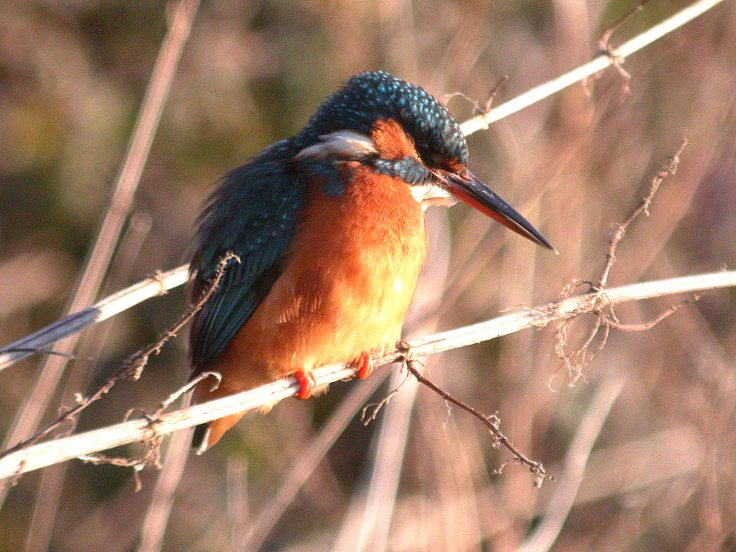 13 February 2009 A short walk along the towpath at Frampton with my children was made pleasant by so many singing birds, very spring like indeed. We had a look at the roosting Long-eared Owl and then a Short-eared Owl which was perched up nearby. A Little Owl called from near the church. 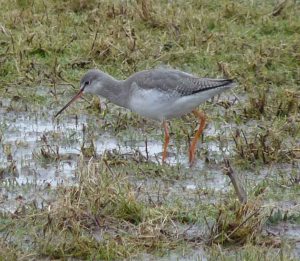 7-12 February 2009 The snow has melted off and the high water levels have attracted thousands of birds back in front of WWT hides. The six Tundra Bean Geese, Dark-bellied Brent, Little Stints and at least four Spotted Redshank have been showing well.

1-6 February 2009 Snow has dominated the month so far, here are a few images from WWT Slimbridge and from home of what I have seen this week. Hundreds of Fieldfare have invaded the gardens of Whitminster, I still have a good variety of passerines including two Blackcap but no Brambling as yet.

Fieldfare in the garden 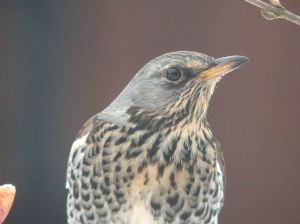 Female Blackcap in the garden. 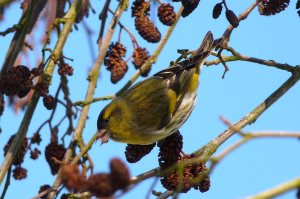 Lapwing in the snow, WWT Slimbridge 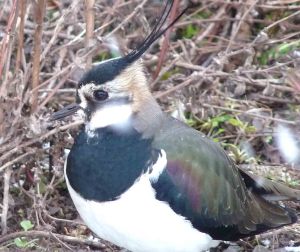