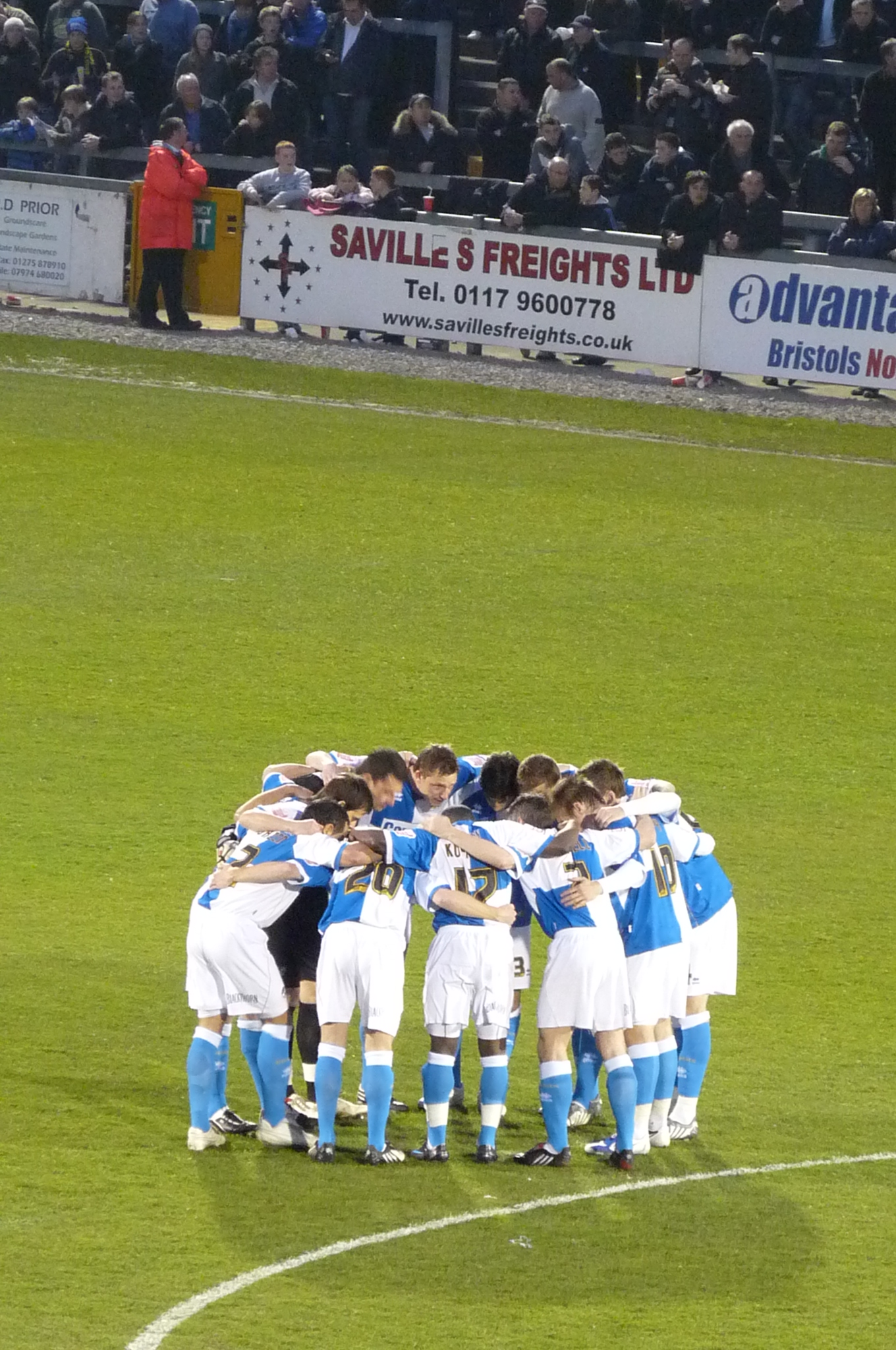 Another great opportunity came my way on Tuesady with a corporate hospitality box at Bristol Rovers FC. The match was against our bogey team, Huddersfield, we have not beaten them for ten years and ended in a 1-2 defeat for the Pirates. A good game and as ever a wonderful experience. It has to be said that the visitors first goal was unstoppable and a fine effort to watch.

Teamwork at the (Mem)Memorial Stadium MJM

From left to right facing us, man of the match Craig Disley (Dis), Jo Kuffour (the scorer) and League One’s top scorer with 25 goals the perfect striker, Rickie Lambert.

28 -31 March 2009 A good end to the month. My first Wheatear, White Wagtail and singing Willow Warbler of the year were all at WWT Slimbridge on 29th. Four Wheatear were at the trust on 30th.

27 March 2009 In my Whitminster garden a male Blackbird is busy collecting worms to take back to young nearby. No chemicals on my lawn! A spell at Frampton Pools this afternoon gave me my first House Martin (1), Swallows (3) of the year and c6 Sand Martin. A few Redpoll and a Siskin, 30 Fieldfare  plus 2 greyer female Pied Wagtail not White were among the flock of 12. c65 Tufted Duck were noted too.

26 March 2009 A quieter day around WWT, the American Wigeon, Brent and Cattle Egret showed but more birds appeared to have departed.  A Great Crested Grebe was on the estuary over high tide, I always like to see them out on the Severn as it reminds me of coastal birding/seawatching.

25 March 2009 At WWT a rather rushed rounds meant I never had the time to watch at one place too long. I went through the c30 or so Wigeon around the Holden Tower and 157 on the Top New Piece without seeing the American Wigeon. It was reported from the Zeiss Hide later. The Dark-bellied Brent was on the Tack Piece/Long Ground. As we had not checked the South Lake JSL had a look from the Hogarth Hide where the Cattle Egret was sheltering from the wind. The heavy jowel and dagger bill can be seen clearly in this image, compare with the slimmer, longer billed Little Egret head shape.

I also had the pleasure of showing two Brazilian girls, Carlina and Alessandra around the N end of the reserve and Decoy. They are in Britain for a month on a fact finding mission and both work in Conservation in Brazil. The first bird I scoped to show them was a male American Green-winged Teal in the 100 Acre marsh but to foreign visitors the array of birds on show was very impressive, easy to forget when we see them daily.

24 March 2009 On the rounds at WWT Slimbridge this morning I noted the American Wigeon, a first winter Iceland Gull was on the estuary and the Dark-bellied Brent.

22 and 23 March 2009 Back at WWT the American Wigeon continued to brighten up March, no sign of DBP’s Cattle Egret but we have no cattle, sheep or horses on the fields locally. It is worth checking any field with stock as it is likely to be in the area. Two Blackcap are singing around the reserve and at least 8 Chiffchaff. The return of cloud and showers saw us recording Sand Martins again. I had 12 and JSL had one today. At least 9 Black-tailed Godwit were on the South Lake this afternoon and a miserly 6 Dunlin in the 100 Acre.

21 March 2009 Out and about in the Forest fo Dean for family reasons but shoehorned in a visit to Boy’s Grave and New Fancy View for ten minutes birding at each site. The Northern Grey Shrike was showing but as ever my attempts to get an image of this bird were poor. The Cirencester bird is more prepared to come closer if you use a bit of fieldcraft or stay in the car.

I also noted a Crossbill here and the Siskins and 3 Brambling (one of the males is nearly in full breeding plumage) at New Fancy were nice to see. Plenty of Mandarin were at Cannop Ponds as were a pair of Grey Wagtail. In addition singing Grey Wagtail was at Blakeney.

20 March 2009 Most notable bird today was the Kingfisher that flashed past me across the dual carriageway on Eastern Avenue Gloucester. It passed PC World and McDonald’s and on inspection I found  a stream hidden in the Industrial Estate. A pair of Shelduck on a puddle at Hempsted Recycling/Refuse Tip  whilst I was recycling stuff was another reminder of the importance of any wetland.

19 March 2009 What a great spell of weather, despite another foggy and misty start to the day hence no birding I saw three species of butterfly today on the WWT reserve. In order from top to bottom..Small Tortoiseshell, Peacock and Comma MJM.

17 March 2009 On the way in to work this morning and on the way home via the 100 Acre I had my and Glos’s first Greenshank of the year. 2 Golden Plover, a Little Stint, five Dunlin and the same duck as yesterday were all still showing. The first-winter Glaucous Gull was out on the sands and the male American Wigeon was still on the Top New Piece. Some flocks of Buzzard were stacking up over the reserve with six together and birds on the wing all day in the sunshine. One of the Blackcap at Splatt Bridge was still singing as was a Chiffcaff. Three Chiffchaff were in song around the trust.

16 March 2009 Due to the canal bridge not being there (bridge being replaced and WWT closed for 2 days) I walked to work from Frampton on Severn early this morning. Two male Blackcap were in sub-song between Splatt Bridge and the first gate to the S. These are more likely to be wintering birds rather than the true Spring migrants that are obvious from the second week of April, they were both deep in the Ivy. A commotion in the 100 Acre led me to think that either an Otter was hunting or someone was where they shouldn’t be as the gulls were mobbing whatever it was. I was delighted when I got my bins onto a large Otter as it fished among the reeds. The 100 Acre marsh was still fairly busy with waders and wildfowl, the same when I went home. Snipe, Spotted Redshank, Redshank, Black-tailed Godwit and Lapwing, Teal, Wigeon, Shoveler, 5 Pintail  and Gadwall. No large numbers but a good variety. The next highlight was walking into a grounded male Goshawk, just 30 feet in front of me, it took flight looking over it’s shoulder and headed across the river to Awre. Next good bird was a male Merlin, this the first I have seen since October!

At least two Chiffchaff sang about the reserve today, I heard three Toads calling from the 100 Acre and other ditches.

15 March 2009 The larger gular patch and white head seen clearly in this image. A WeBS survey day and birdwatch morning at WWT Slimbridge. All of our sightings are on the WWT website. Some wonderful display was witnessed by JSL and I from the South Lake Obs. A sinensis Cormorant pair were engaged in ritual display, offering of weed and head throwing, bill lunging with guttural calls all noted.

14 March 2009 A call from Mike King kicked started a bit of local birding, he had discovered what is probably the second largest flock of Brent Geese recorded in Glos, the chance to see and hear them was a real draw and quite a highlight for me. I managed a few shots and there were at least 58, Mike counted 55 but they were on the water and bobbing up and down. One had a very clear neck slash and was quite black but it was very hard to watch individuals as they were out of view longer than in view. I also saw my first three Sand Martin of the year. The wintering female Blackcap was drinking in my garden.

13 March 2009 Only a 15 min look about Townfield Lake at Frampton this afternoon where 10 G C Grebe and a Little Grebe were the most notable birds.

12 March 2009 Another decent day about WWT Slimbridge especially during the rounds. An adult breeding Mediterranean Gull and first winter Iceland Gull were on the edge of the Dumbles over high tide. The last 24 E White-fronted Geese appeared to depart this morning leaving a single and four wild Greylags. In the evening at least 2 Curlew flew over my house heading N calling plus other mystery calling birds that were heard by Nick Goatman at Frampton who tipped me off and I heard them over me. It was also nice to see the American Wigeon again.

11 March 2009 At high tide this morning I picked up the first Avocet of the year on the Dumbles, it was among the Shelduck before flying off the saltmarsh where it fed for a while. The gulls pushed it around a bit and I last saw it drop behing the shelf. On South Lake an adult breeding Mediterranean Gull was present, this one had a large notch in the right wing and more white in the face than the bird on the 9th. Later in afternoon I saw the first summer bird again here from the tractor, DBP saw it in fields W of Slimbridge village on spread fields. Whilst leaving work I went through a flock of Common Gulls on the road fields and an immaculate adult breeding Mediterranean Gull was with them, they dropped onto South Lake. This makes 4 in three days! A Black-tailed Godwit beginning it’s moult was on the Top New Piece, this is new in. At the 100 Acre 4 Spotted Redshank, 35 Redshank, 10 Snipe, 15 Golden Plover, 50 Lapwing, 5 Little Grebe and 40 Curlew were present. At least 60 E.White-fronted Geese remained on the Dumbles with the DB Brent.

Highight of the day was at 1705 at home, whilst unloading logs from my car I heard White-fronts, looking up c 50 were flying low over my house and heading for WWT. They were probably on another pre-migration flight, brilliant garden tick!

10 March 2009 Again I will upload images of my highlights recently rather than a full blog of the period. The E White-fronted Geese made a mock attempt to migrate this morning from WWT. They flew high over the reserve and out over toward Whitminster, turning to Longney and returning after 40 minutes. A clear night tonight should see the rest of the flock leave and looking out the window the moon is shining bright. I had a report of two Swallows from Whitminster today but they are probably the Sand Martins from Frampton. A look at the WWT 100 Acre this morning revealed c200 duck which were mostly Teal and Wigeon but 4 Spotted Redshank, 1 Little Stint, 1 Golden Plover and a first summer Mediterranean Gull were also present, the Med was relocated on the South Lake later. Yesterday whilst JSL and I were shovelling gravel at the back of South Lake he noticed an adult summer Med in with the B.H. Gulls. 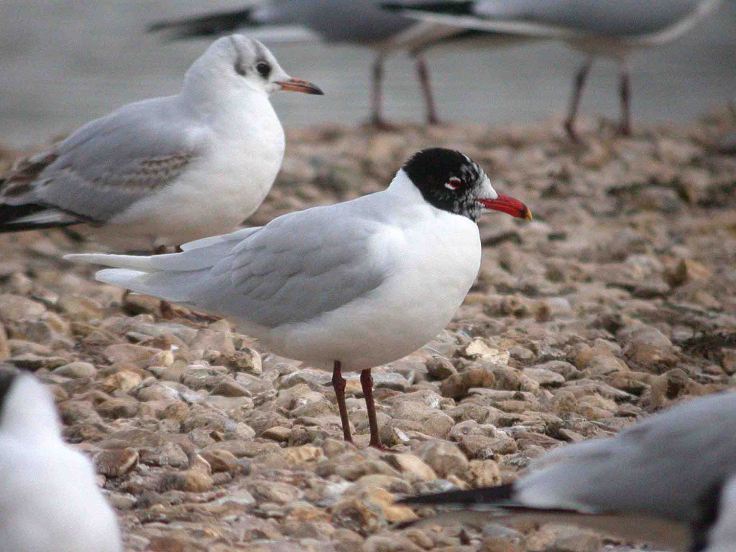 The end of winter! MJM. 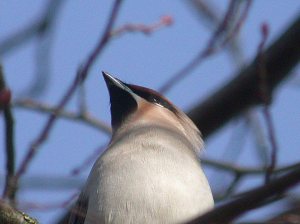 Another nice Nick Goatman find at Frampton on Severn, one of the 22 Waxwings near the Court Lake MJM.

I often see Shoveler diving to feed on the Tack Piece scrape during the early Spring. They work a patch over systematically, I never see this behaviour regularly anywhere else. MJM. 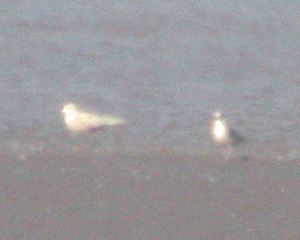 The Iceland Gull is about the estuary most days and often at the same time as the Glaucous Gull. Never very close though!