30 May 2009 You cannot beat England on a day like today. An early start out and about checking out a few local sites to home, I was rather surprised to still find Nightingale in full song at Frampton on Severn. An interesting aythya hybrid was also present with the Tufted Duck (30) on Townfield Lake. It was reminiscent of Lesser Scaup but had a look of Ring-necked Duck about it. Closer views would help.

Later in the day I headed for the Forest of Dean with NRS, we had a great morning to 1330 with 50 Four spotted Chaser, 5 Broad-bodied Chaser, male Emperor, Downy Emerald, 500 Large Red, 150 Azure, 10 Common Blue and 5 Blue-tailed Damselfies. Garden Warbler, Tree Pipit, 5 Willow Warbler, Siskin with young and singing Pied Flycatcher were also noted.

Painted Lady in my garden M.J.McGill

26-29 May 2009  My first Azure Damselfly for the garden plus an unidentified drag sp. The undoubted highlight has been the Painted Lady invasion. Today (28th) I noted over 2000 at WWT. In 15 minutes I watched 0ver 300 pass me in the Big Pen with over 200 seen crossing the A38 on the way home to Whitminster, only a 12 minute journey, spectacular insect migration. I even had one in Tesco this afternoon.

26 May 2009 Very little in the way of migration but the breeding birds at WWT are as ever very entertaining. Large numbers of Painted Lady butterflies (c300) noted about the reserve today.

25 May 2009 Some migrants around WWT Slimbridge with 3 Ringed Plover, 2 Whimbrel, c18 Black-tailed Godwit, 27 Dunlin and 3 Sanderling. A second summer Yellow-legged Gull (not pictured)and a first-summer Herring Gull with white wingtips were interesting. I noted c70 Painted Lady butterflies with seven sightings in my garden at dusk. 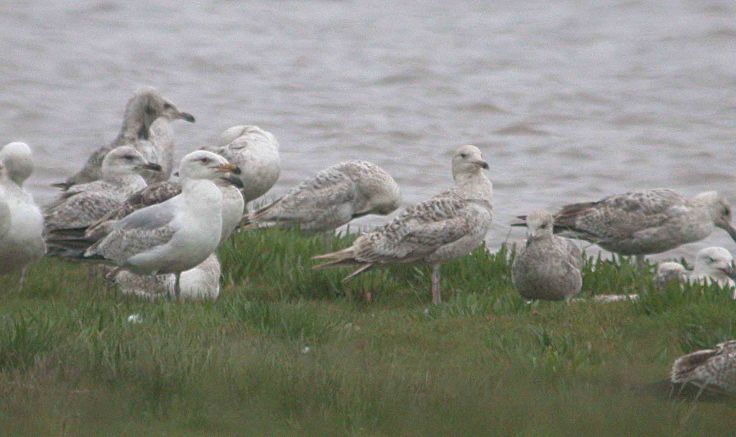 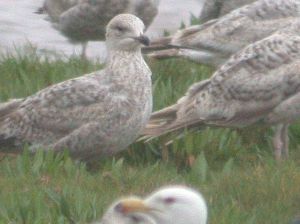 22-24 May 2009 Back in Glos tonight after a weekend away on Anser tour to Norfolk, the best Norfolk trip I have ever known with amazing birding. More details and trip report with some amazing observations will follow this week. One interesting migration observation which was apparent yesterday and even more so today was the arrival of thousands of Painted Lady butterflies. I mentioned it to NRS who had also noted it. I reckon that I saw over 600 over the last 24hrs with most today, all seen on my travels around East Anglia. They were all worn and simply flypasts but impressive all the same. On checking tonight reports of 100 an hour in off the sea at Beccles gives some idea how many are involved, Severn Beach had 5 today and more reports are due to follow for sure. Sadly, at least two ended up on my windscreen. Good to see 3 bat sp hawking feet from my home this evening.

17 May 2009 At WWT only the, 1 Barwit, 6 Curlew, 18 Dunlin and 2 Ringed Plover noted off Middle Point with 6 Sanderling and a single Dunlin just to the N of here. The two first summer Mediterranean Gulls on South Lake are displaying with one of them goung through a change in bill colour, now deeper red.

16 May 2009 Only an hour out and not a lot to report. 200 Swift over the small copse at Saul Warth the highlight. Only 15 small waders seen in flight over the estuary, DBP reports that they have all departed.

At WWT I headed for the 100 Acre first. Lots of birds were singing due to the still, calm start to the day. It was shrouded in a heavy mist but not that cold. One of the first birds of the day was a Great White Egret (undoubtedly the bird John Phillips saw the day before at Lydney) which was fishing in a pool. After a while it flew to another pool nearby which is adjacent to Splatt N reedbed and fished for 20 minutes before returning to the 100 Acre. It was seen a little later heading for Saul Warth.

A Cuckoo was singing and the still weather allowed me to start a count of the singing warblers on site. My second surprise of the day was a pair of Pochard, very late or lost migrants, unusual for mid-May. By 1330,  I had logged 117 singing Reed Warbler, 23 Sedge Warbler, 10 Chiffchaff, 8 Blackcap, 1 Lesser Whitethroat, 4 Common Whitethroat, or first Willow Warbler for two weeks, and best of all a Garden Warbler (rare here in Spring and I cannot recall hearing a singing bird at WWT before) and a selection of commoner species. It was clear that a large gull (Herring/LBB) passage was still in force, I estimated 25 birds a minute until 2.00pm at least but was not watching continously through the day. At least 250 Swift went through early with 1500 Swallow estimated during the day. Some Sand and House Martin were also involved. A first summer Mediterranean Gull was among the Black-headed Gulls on the Top New Piece and 2 Greenshank and a Reeve added to the interest. As did a Greenshank and 12 Black-tailed Godwit on South Lake as I drove by.

At high tide I headed out to check the estuary as a large number of waders were about, it was not dissapointing. 9 Grey Plover , 9 Bar-tailed Godwit, 15 Sanderling, 4 Knot, 2 Turnstone were among the stock waders of 160 Ringed Plover and 200 Dunlin. Seeing breeding plumaged birds is always one of the highlights of  each Spring. A pair of Whinchat had also arrived at Middle Point. At lunchtime (1345)  I headed out to the estuary where the gull passage was still on, what had gone through whilst I was not watching? A short wait and I soon had a dark phase Arctic Skua making it’s way across the mud and sand. I followed it all the way up the estuary, it stalled over a crow with it’s food but doubled it’s speed when over the water. To my surprise it settled on a sand bar and was joined and dwarfed by a pale phase skua next to it. Could it be, ten years of intense searching for the magic Pom in the Upper Severn in Spring, too far to confirm, I had to get closer so I headed up river to gain a better view, not believing. Checking again, no sign but after 5 minutes I found the pale bird, it was sitting in the water, it showed the right head pattern and I could see what appeared to be tail spoons when zooming up with the Swarovski. It soon took flight, made a few circles before it floated back downriver past me giving glorious views of it’s, as the Severnbeachboys put it,  ‘full set of cutlery’. It was a fully adult Pomarine Skua. I radiode’d and started to ring people but lost the bird whilst doing this, my phone died and along with NRS and DBP who had arrived could not relocate it, the weather had closed in again. I went back to the digger with a big smile and finished the project I was working on. At the end of the day at 1700 I went back to the office, after updating the WWT website I headed out with DBP and NRS to search for the birds again but visibility, weather and low tide had beaten us. We sifted through and counted the marvellous waders on show. I had seen a male and female Wheatear to add to the day tally. I left for home at 1840. 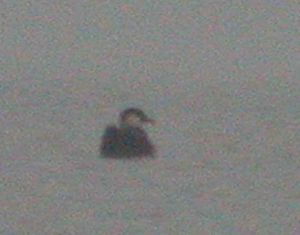 Sedgies in the Sunny and during overcast conditions MJM
Great birds whatever the weather. See following two images 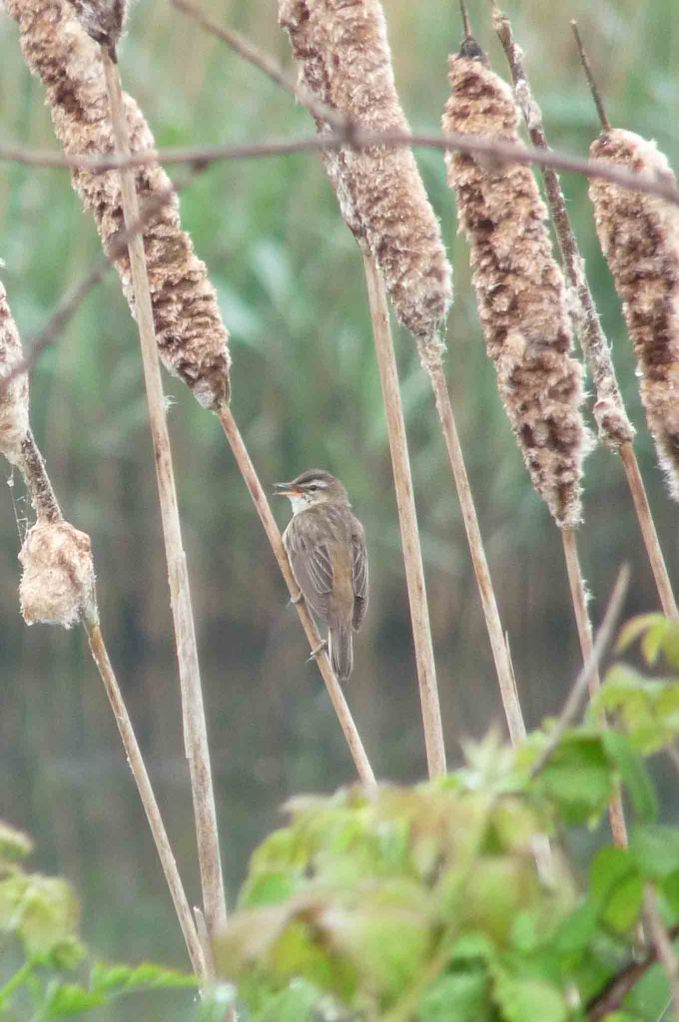 13 May 2009 I will update with images later in the week but some migration was in evidence today at WWT/The Severn. I noted a Reeve, 4 Greenshank, 4 Red Knot, 2 Bar-tailed Godwit, 28 Black-tailed Godwit, 70 Dunlin, 45 Ringed Plover and large numbers of hirundines.

10-12 May 2009 A busy period at work with safari’s, dawnchorus and a photo safari but some nice results. 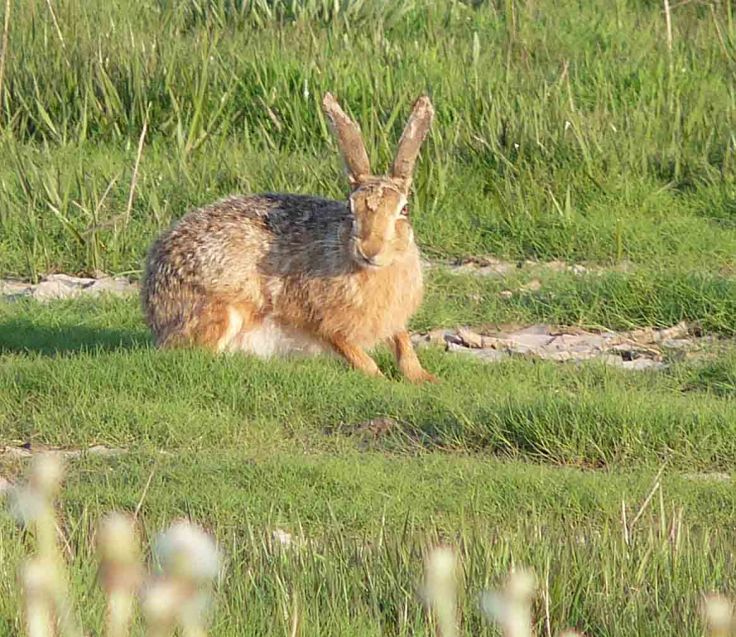 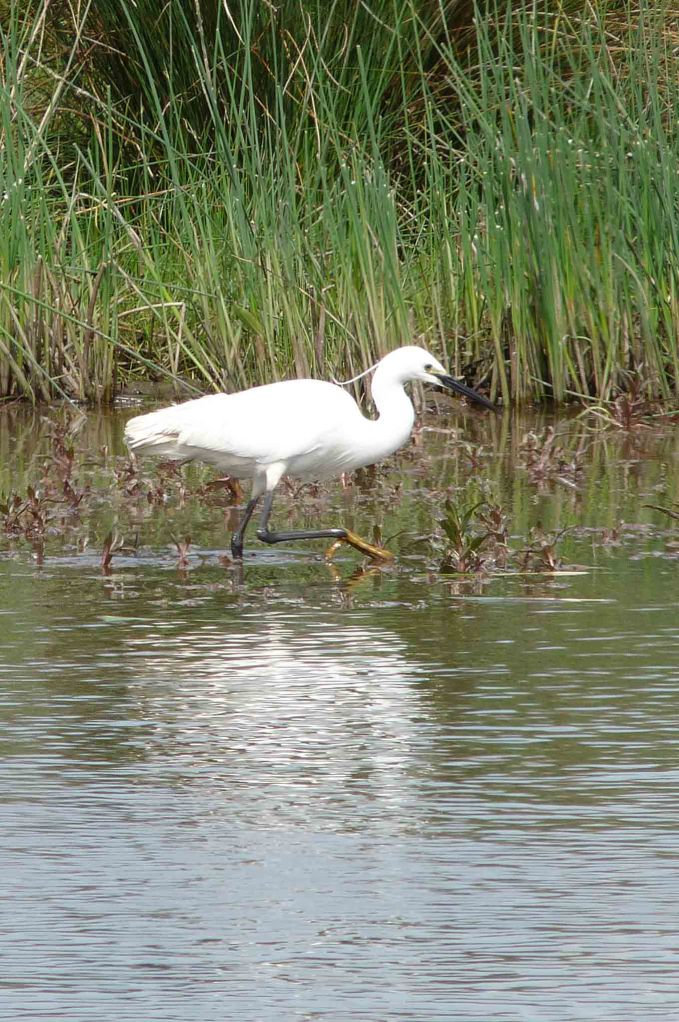 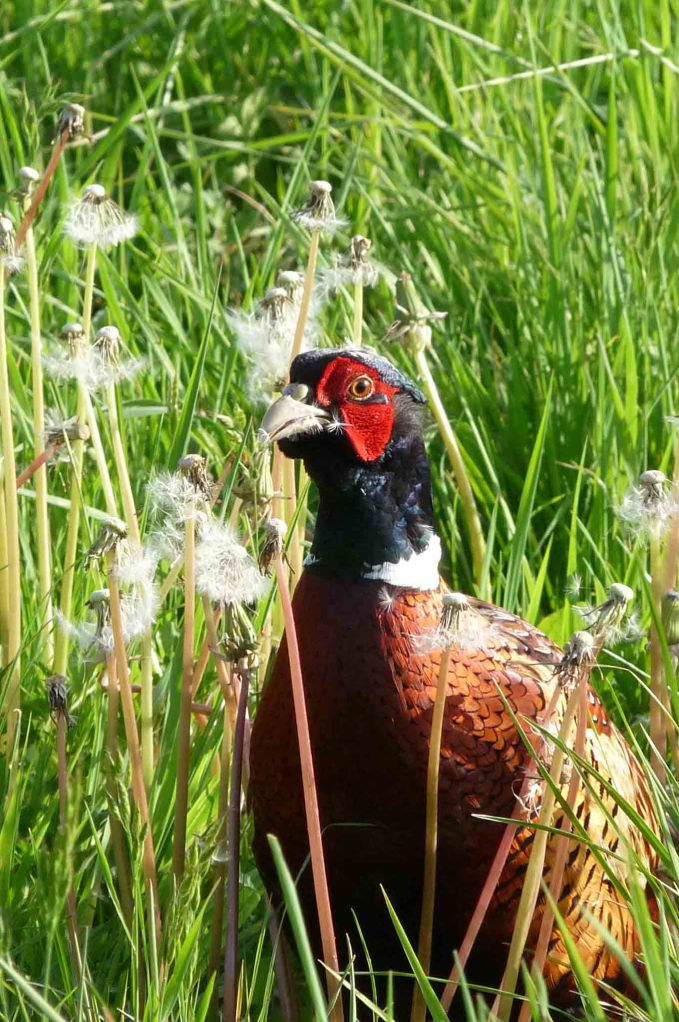 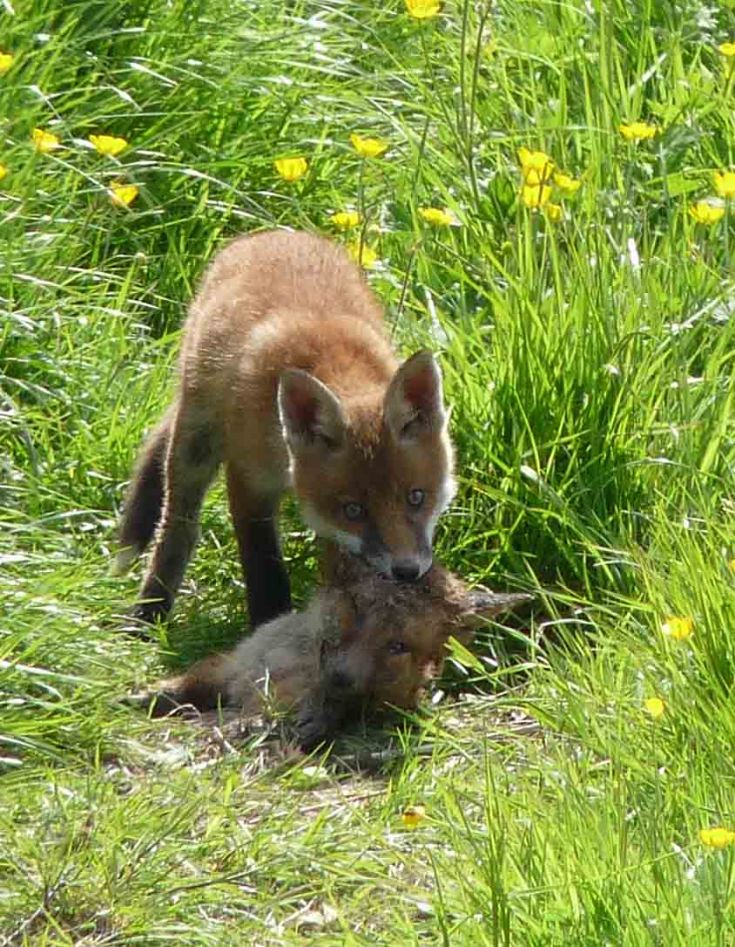 8 May 2009 Out at 0530-0800 and 1115-1210 where a pair of Whinchat, 70 Dunlin, 5 Ringed Plover, 11 Sanderling, a Whimbrel and 2 Little Terns were the best birds today on the Severn. Two Common Sandpipers at Splatt Bridge were nervous but gavegood scope views as they were flushed by walkers every few minutes but were succesfully harvesting insects on the towpath. A Common Tern on Townfield Lake was eclipsed by a group of 9 Dunlin (scarce here). My hoped for skua/tern passage did not happen in the Upper Severn but Severn beach birder Paul Bowerman yet again watched an Arctic and Pomarine Skua head over the Second crossing into Gloucestershire this morning. An evening watch for three hours produced 3 and 13 Whimbrel N.

7 May 2009 My first Azure Damselfly of the year, 50 Blue-tailed Damslefly, 20 Common Blue, 30 Large Red and 3 Red-eyed Damselflies too. The latter was seen on the 4th. 61 Dunlin and 4 Ringed Plover in the WWT Top New Piece was encouraging.

6 May 2009 A breeding plumaged Golden Plover in the WWT 100 Acre was the highlight.

5 May 2009 Another dead day on the River Severn (except for 300 lovely Shelduck) and very few migrant passerines, a new Wheatear, another pair of Yellow Wagtails and a male showing territorial behaviour at a new site. I watched two or possibly three males fighting in mid-air yesterday with at least 3 possibly 4 birds present.  It would be nice to see this species doing well locally after the declines of recent times. They go so well with Cattle and marshes. Sedge and Reed Warbler and Common and Lesser Whitethroat seem to be taking territories in all sutiable habitat. A Cuckoo was singing at the South Finger. I also noted a Fox with a Shelduck in it’s mouth this afternoon.

Male Northern Wheatear at WWT MJMcGill
A poor Spring for this species for me, much less than I normally see with less than 20 individuals noted locally so far.

4 May 2009 Some new birds and passage around the Severn. I logged 3 Whimbrel, a Wood Sandpiper, Curlew Sandpiper, Spotted Redshank and Greenshank joining the Dunlin, Redshank and Lapwing on the Top New Piece, WWT. A total of 70 small waders were about the estuary but all were Dunlin or Ringed Plover.

3 May 2009 Some new insects for the year today with Common Blue Damselfly, lots of Blue-tailed and Large Red Damseflies and good views of female Hairy Dragonfly at WWT.  New birds included another Curlew Sandpiper on the Top New Piece at WWT and the Garganey was still present. 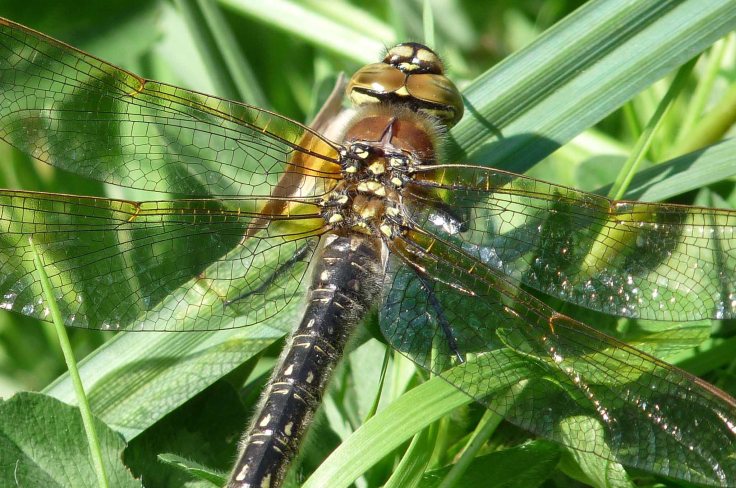 2 May 2009 Only gardening so far today, wish I was scoping a Collared Fly! Lots of Glos birders have been to see it so far but not me.

1 May 2009 A look at Frampton Pools and a single Common Sandpiper and 2 Common Terns were notable, an obvious emergence of Large Red (30) and Blue-tailed Damselflies (10) was in evidence.