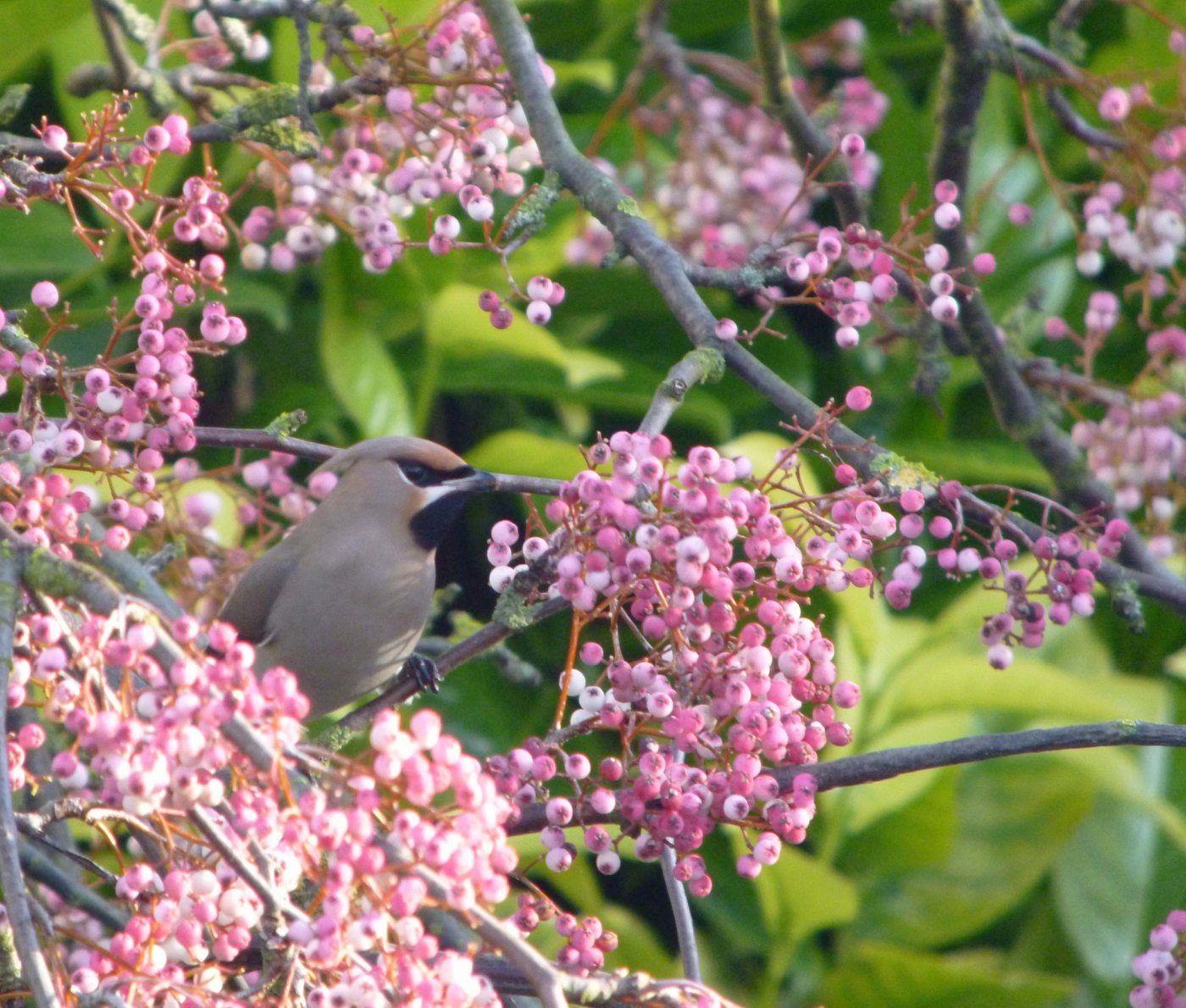 30 November 2012 A frosty but sunny start to the day, good journey to Cambridgeshire via a coffee stop, two Red Kite were noted during this journey. Our first port of call was to see a flock of 40 Waxwings in a village outside Cambridge. For most of us it was the first sighting of the current invasion and as ever very welcome. This flock were engaged in standard Waxwing behaviour of spending time sitting in a large Ash tree, dropping to Pink Rowan (sorbus) to grab berries before retreating to digest with a good lookout point. Flight forays away from the site were likely to be for water. 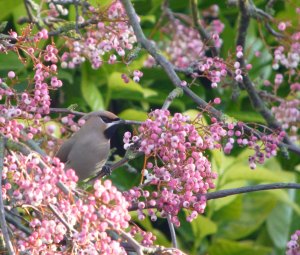 Moving on to Norfolk we had a look around the Wolferton Triangle on request for a Golden Pheasant but had no luck. At Thornham Harbour we spent the rest of the day watching the movements of bird to feeding areas or to roost as it was fairly calm and a sunny end to the day.

Thornham was a busy birding spot, I spent much of the time straining my ears to hear if any Lapland Buntings were around, there were plenty of birds to see. Rock Pipits called regularly, various waders fed or flew about the creeks as it was low tide. A large flock of 1600 Pink-footed Geese arrived and landed on the beach, Jayne spotted a leucistic bird among them.  More Pink-feet were at Holme marsh along with a Buzzard and more notable a Red Kite. Two Snow Buntings flew low overhead calling as they headed for Titchwell. A Short-eared Owl also hunted the marsh here and the Brent Goose flock were occasionally flighty and showed over the saltmarsh.

A female Merlin was on the beach and hung around for a while no doubt waiting for a meal, the Linnets that were feeding in the saltmarsh would have done nicely for it. It was a fine sunset with many birds calling as they went to roost. As we passed Titchwell the Short-eared Owl was still hunting up and down the edge of Thornham marsh with Pink-footed Geese and Greylags feeding there too. We relocated nearby to Brancaster beach car park and watched Goldeneye and Red-breasted Mergansers on the sea and coastal creeks. At dusk a search for Barn Owl ensued around many of the villages on the way back. None were seen but a Tawny Owl was pinpointed in the headlights for all to see. 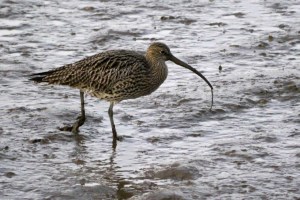 1 December 2012 A wet and blustery start to the day, a pre-breakfast visit to Gore Point was trying, the rain, wind and darkness made it difficult to see but a few birds were noted, I did see two Snow Buntings on the beach shingle but they were very hard to see and breakfast called. After eating we headed for Titchwell RSPB where we watched Spotted Redshank alongside Common Redshank and Little Egret on the brackish marsh. Large flocks of Golden Plover and Lapwing roosted on the freshmarsh. At the beach it was fairly busy, male Long-tailed Duck, a Great Northern Diver that drifted and dived away into the surf, Red-throated Divers, Goldeneye, Eider and 2 close Common Scoter and flocks of them further out. A few Guillemot were drifting by.

We had to return to the hotel at lunch to sort out a problem with rooms but were soon back on the birding trail.

Looking out from Hunstanton cliffs the Fulmars were crusing gracefully and a few more species were noted on the sea as the tide was on the way out. Heading back along the coast a flock of the bizzarre Egyptian Geese were seen near Burnham Overy. Next stop was in Wells next the Sea, Brent Geese flew over the town whilst some lunch items were sourced and facilities used. A good walk out was the next plan so we returned to Holkham and drove slowly along Lady Anne’s Drive looking at the geese on the way. The Pink-footed Geese were fabulous, thousands of them in good light and close. A walk out and through the gap exploring saltmarsh and dunes was very bracing in the cold wind. A couple of girls were actually paddling bare-foot in the sea, good luck to them.

We finally found a few Skylark, Meadow Pipits and Linnet flocks but not the hoped for Shore Lark. They are rather scarce this winter, even as I finish this report on 31 December there are none being reported. A walk along the pines provided sheltered birding and we enjoyed the geese again but also a hunting Barn Owl that gave prolonged views. We returned after dark to the hotels.

2 December 2012 A lovely sunny start to the day, a Waxwing flew over me calling as I walked into the hotel for breakfast. Our first stop was Titchwell RSPB where we headed for the beach passing three Marsh Harriers, we walked part way to Thornham Point. It was high tide as we arrived and thousands of birds were on the beach with a rough sea to boot. Once again a male Long-tailed Duck did a fly-by, perhaps the same bird as yesterday. Plenty more Red-throated Divers were moving along the coast with Great Crested Grebes, Goldeneyes, 3 Goosander (male and two females), scoter, distant auks, gulls and dabbling duck. Large flocks of Sanderling scurried along the beach with Dunlin, Bar-tailed Godwit, Knot, Turnstone, Oystercatcher and gulls. A single Ringed Plover and at least three Mediterranean Gulls were also seen. A really good birding session with plenty to see. 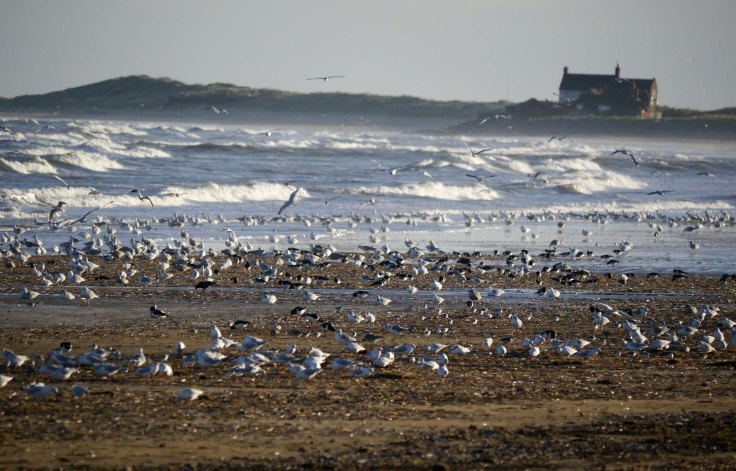 Heading back across the reserve we had a look at the new hide and the marshes, Little Grebe, Shoveler, Wigeon , Teal, Pochard and Pintail were all present. A small flock of Black-tailed Godwit were noted. Back on the seawall and despite the wind three Bearded Tits were found, it was a case of ‘there behind you’ as Ruth spotted them, she was the only one looking the other way when they appeared. We had Water Rail and Cetti’s Warbler calling in the carr.

A Holme village a flock of Waxwing flew over the car as we got out. We relocated them in the dunes as they fed on Sea-buckthorn, they rested and digested whilst looking out to sea across the Wash, crests waving in the wind. 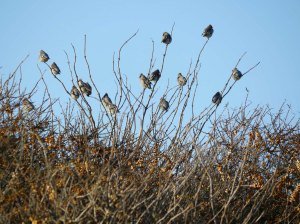 A thorough search of the shingle and beach did not give up any Snow Buntings but a selection of waders and Linnets and Goldfinches gave us something to look at. News of Penduline Tits in Cambs and pretty much on the way home gave us a target but as we arrived on site it was getting dark and there was not enough time to search for them.

We arrived back safe after some traffic around Birmingham with a fair list of birds and a weekend that certainly blew the cobwebs away.