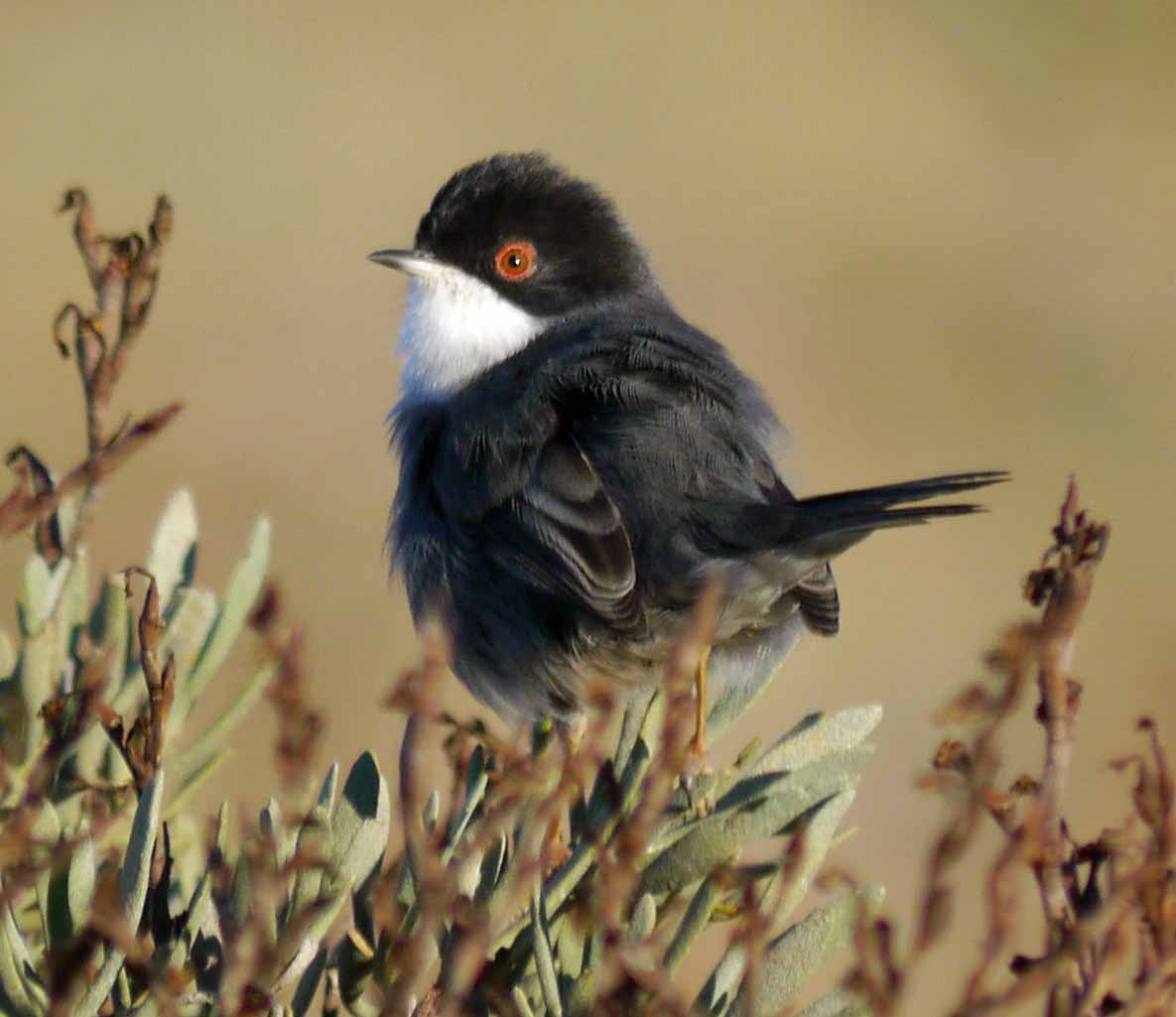 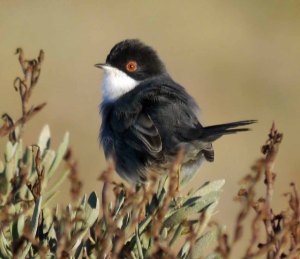 Male Sardinian Warbler-common bird of the region
All images MJMcGill

Ria Formosa-Quinta de Lago
A welcome family holiday, was late in the year due to my weekly hospital appointments (long story) during the spring, summer and autumn. We spent two nights at Quinta de Lago, one night in Seville (Seville province), a night in Galaroza, Spain, two nights in Castro Marim back in Portugal with day trips back into Spain.

An evening arrival to Faro in wet weather the night before never allowed any birding but we settled into an apartment in Quinta de Lago and a noodle and rice dinner from the local Chinese takeaway. It rained all night and most of the day, very heavy at times and caused a bit of flooding. I went out early to check out some pools and saltpans I have been to before, all sites are well known to birders. First birds of the day were Azure winged Magpies, flocks are constantly on view in this part of Iberia, flying across the road in mobs. Arriving at Lagoa de Sao Laurenco and adjoing saltpans I was greeted by a Caspian Tern, a few were about including a juvenile begging for food. On the lake were Little Bittern, egrets, the intoduced Black headed Weavers, plenty of Gadwall, Little Grebe and Coot plus Purple Swamphens, Pochard, Tufted Duck, Mallard, Great Crested Grebe and gulls drinking including 2 Audouin’s. On the golf fairways 2 Glossy Ibis, Black tailed Godwits, White Storks and 3 Snipe fed. Hoopoe, Serin, Sardinian Warbler, Spotless Starling, Crested Lark, Stonechat and Zitting Cisticola were abundant and formed the daily species line up for the rest of the trip. Grey Plover, Dunlin, Spotted and Common Redshank, Common Sandpiper, Greenshank, Turnstone, Bar-tailed Godwit, Curlew and Whimbrel were all noted. Marsh Harrier, Kingfisher and Sandwich Tern were also seen.

We spent the afternoon in a very wet, rainy Vilamoura Harbour where a Common Tern fished.

I returned to Quinta de Lago later when the sun came out as did the birds. One of the highlights was watching a Black-winged Kite hunting in flight and from the tall trees to the east of the lake (open area with line of tall trees, bird favoured one with two storks nests in it). The kite was still present next morning in the same area. Lots of birds came in to roost at dusk including the Black headed Weavers. A selection of images are shown below. 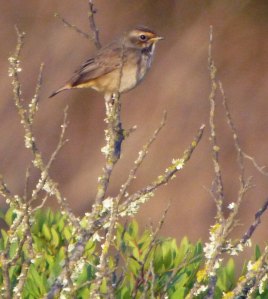 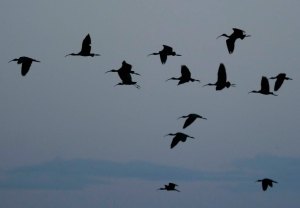 Images above
Hoopoe sheltering from torrential rain using the bushes above the wall as an umbrella. They are very common in the Algarve and provide the classic call as an audible backdrop. I was surprised how many Blackbirds were present, migrants from the north?
Bluethroat– this is a dull 1st winter bird, they are a common wintering species in the saltpan salicornia scrub. I did see some blue throated adults including a bird that appeared to have a lime green ring on the right leg. I noted at least eight. The adult males were busy chasing off territory intruders.
Glossy Ibis– at dusk at least 50 came in to roost at Lagoa de Sào Laurenco along with hundreds of egrets. 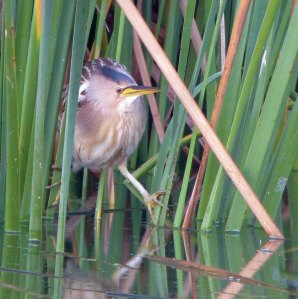 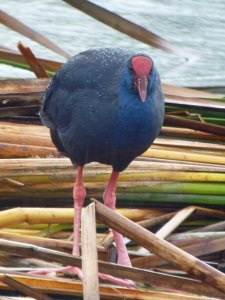 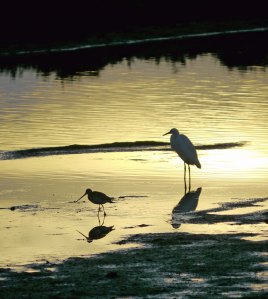 Images above
Little Bittern– I saw at least three, mostly in flight but this bird came out at dusk.
Purple Swamphen-ten plus were busy ripping up roots of the bullrushes.
Bar-tailed Godwit and Little Egret on the saltpans at sunset. 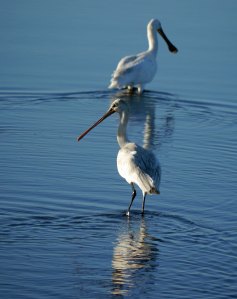 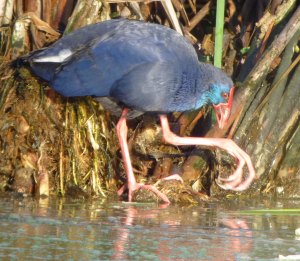 Images above
Spoonbills and Purple Swamphen.

26-27 October
We left Quinta de Lago (saw 2 Red-rumped Swallow near Tavira) and used the small car ferry at Vila Real de San Antonio to cross the Guadiana to Ayamonte, Spain. The first time I have arrived in Spain from the water. An afternoon, night and morning in Seville was all about food, architecture and historical sites but I did see what was probably a Lesser Kestrel over the cathedral/Giralda at dusk and parakeets were everywhere. Tapas bars and a visit to the stupendous Alcazar and Museo were the main focus. I was somewhat distraught to find out the football match between Seville and Osasuna was a midday kick off. I saw the away team coach arrive in the morning as we stayed in a hotel next door. I believed it to be an evening kick off otherwise I would have got a ticket. The atmosphere and sound in the stadium was amazing to hear. Seville won 2-1. On the way to our next accommodation in the Western Sierra Morena we stopped off in the Zufre, Sierra de Aracena. Griffon Vultures soared above and Crag Martins fed around the church. It was hot and sunny and this was a great Tapas stop, also good for butterflies.

Galaroza
A night in a chestnut coppice forest was a new experience, it was a very rural place in a traditional cottage. Often the only sound, apart from birds was of chestnuts (castãna) falling to the ground. I did wonder if this word had anything to do with castanets and found after investigation they were indeed made from chestnut wood and look a little like them. We spent the night next to the chetnut wood open fire roasting chestnuts. This tree was dominating our days, we saw plenty of chestnut sellers in Seville and lots of families collecting them en route. A few Woodlark were in song around the woods and other notable birds were Cirl Buntings, Firecrest and Griffon Vultures. 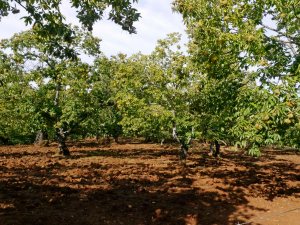 Images above– Chestnut coppice with ploughed soil below. Most of the forest had an understory of scrub but this image shows the trees better.

Chiffchaff in the Chestnuts
A greenish bird with a short rapid hweet call. 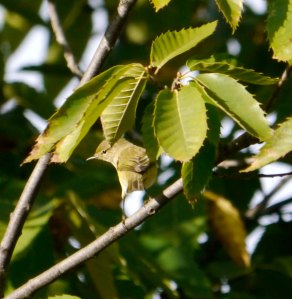 Images below– Crag Martins play around the marvellous Mezquita at Almonster de Real. 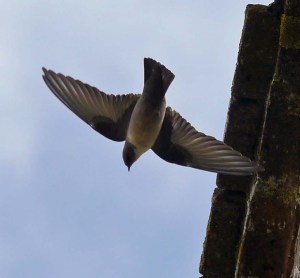 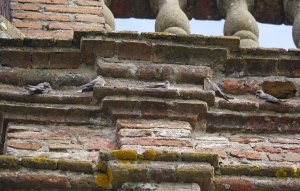 29 October
Castro Marim salinas, Portugal and Odiel Marshes, El Portil Lagoon, Punta Umbria beach, Huelva, Spain
It is so easy to pop across the border for a few hours or the day. I went out for an hour in the morning, spent the afternoon at Huelva and a quick visit to El Portil. We had lunch on the beach at Punta Umbria where I saw the only Southern Grey Shrike of the trip as it flew west. El Portil had Flamingo, waders, Black-necked Grebes and a Black and Whiskered Tern as well as duck including Pintail in numbers. 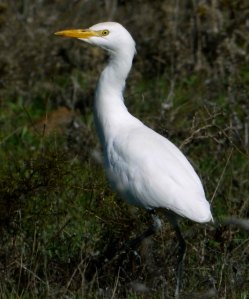 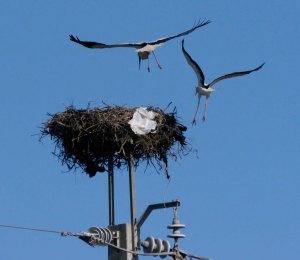 Cattle Egret and squabbling White Storks (above) at Castro Marim

Caspian Terns (below) Odiel Marshes, Huelva.
At least six were fishing the creeks and channels with the visitor centre area being best for viewing them. I watched one mobbing an Osprey. 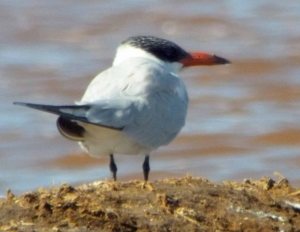 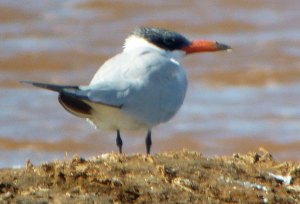 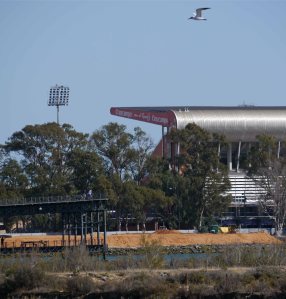 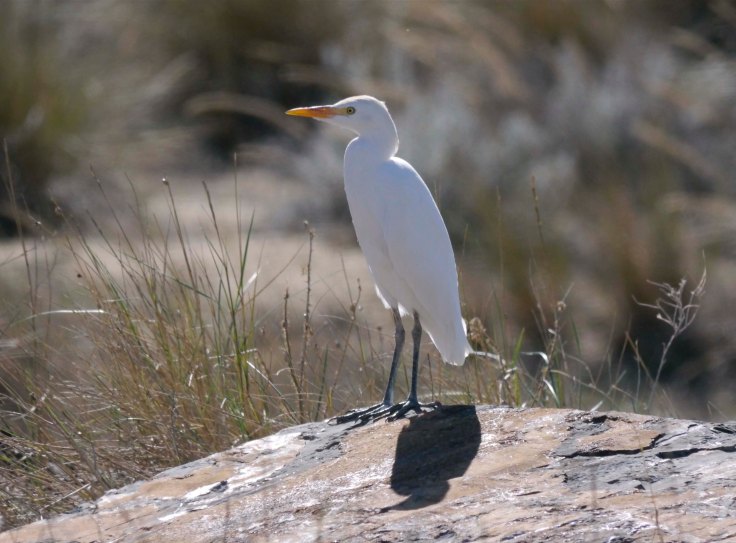 Hoopoe (below) delightful to see them regularly especially from the car. 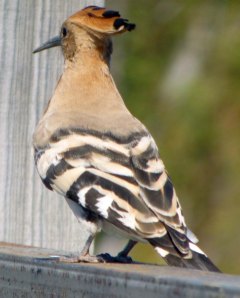 Ospreys (below) were re-introduced to the Odiel Marshes. They show very well as they hunt for fish or perch on exposed places with a view. I saw at least four. The image with Greater Flamingos also shows a Black-necked Grebe, dozens were on the salinas. I also searched the creeks which had plenty of waders roosting at high tide but only the longer legged species. The smaller waders were out in the salinas somewhere but began appearing as the tide dropped. This site is probably better at low tide for variety of species and close views. 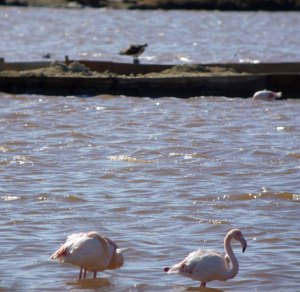 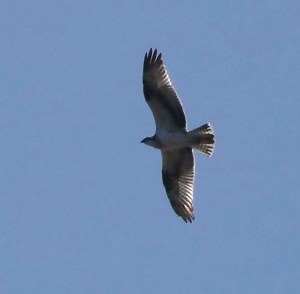 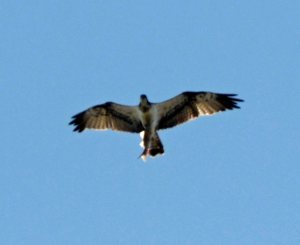 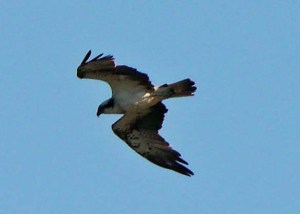 30 October
Castro Marim castle gave excellent views over the salinas, a great way to see where the action is and work out a plan. I was not really out birding but saw Marsh Harrier, White Storks, Booted Eagle, Lesser Kestrel over the fort, Crag Martins and plenty of familar species.

Tavira, Portugal A last afternoon out after eating in the town and exploring was to the Ria Formosa and saltpans of Tavira. Flocks of Flamingo, Mediterranea Gulls, Avocets, Black-winged Stilts and other wetland species were to be seen but the highlight was a ringed (but unreadable) Slender-billed Gull adult. Bluethroat, Sardinian Warbler (below) and close wader watching at lower tide. I noticed small boats doing trips along the tidal creeks, they allow close and quiet access to birds on the sandbars and mudflats, well worth a go for photography. 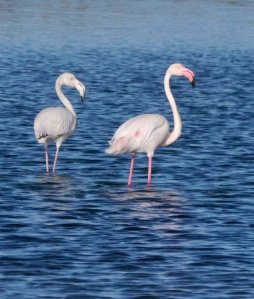 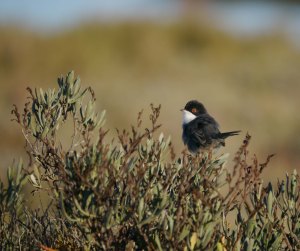