A female Whinchat and collection of 8 Wheatear included one clearly identifiable male Greenland.

Whinchat, along the Severn fences 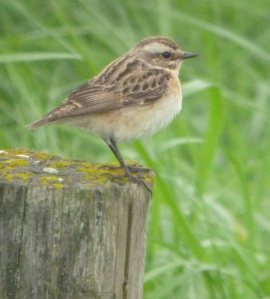 April 24 2014
Male Ruff-such a smart bird had to show it again. It was crouched in the water on South Lake for a long time, maybe predator related.

Bar-tailed Godwit– one of three feeding on the sands, none were in breeding plumage, all were first summers.

April 13 2014
At work I gained my best views yet of the Hooded Crow plus my worst of the Taiga Bean Geese, a notable passage of Swallows was in evidence and 9 Ringed Plover and 45 Dunlin were of note. Bird of the day was the male Ruff on the Rushy. A late call from Nick Goatman alerted me to more Curlew migration, he noted two flocks, one of c100 and a larger one of c200 climbing high and heading inland. I heard a few from my garden plus a few Swallows feeding over the village.

Pair of Shelduck on Severn ooze

April 12 2014
An evening walk to Hoch Ditch with Rich H turned out to be chilly and breezy but 33 Dunlin and 6 Ringed Plover gave close views, a flock of c45 Curlew were also seen. A morning walk to count singing warblers on the reserve gave me 3 Reed, 2 Sedge and 5 singing Cetti’s Warbler.

April 11 2014
A lot of bike exercise today, a few miles early doors and then a trip to the Forest of Dean to do a couple of rides and a couple of walks with my son. A ride around was memorable for bird song. At RSPB Nagshead I caught up with singing male Pied Flycatcher and a pair of Goshawk. New Fancy View surrendered 3 Crossbill which included a close fly-by female plus 30 Siskin. A Tree Pipit at Crabtree Hill.

At home two House Martin were back over Whitminster

April 10 2014
A pre-work stroll produced a male Greenland Wheatear, a sumptuous fly-catching male Redstart and a Yellowhammer flying along the foreshore. There were also a couple of Sanderling on the estuary sandbanks. Nige Warren got me onto a  distant Red Kite, this provided a first of the year for me in the Vale. At home the Orange Tip butterfly was around again.

April 9 2014
A Little-ringed Plover was flying around calling over the Top Hut/Rushy area at work. It appeared to drop down onto the latter site. Harriet had an Orange Tip butterfly in our garden.

April 7 2014
Back to work at Slimbridge, a smashing start to the day was watching 13 Avocets arguing, pair bonding, nest scraping and chasing and being chased by crows. A local scarcity came in the form of a female Goosander.

April 6 2014
An hour out on my bike along the Glos to Sharpness Canal- 2 Sand Martin and finally Willow Warbler,  at Saul Warth the usual birds but out on the estuary 18 Ringed Plover, 1 Little Stint and 3 Dunlin.

In Whitminster today I saw a Red-legged Partridge on the road, it was completely soaked looking miserable and bedraggled. It struggled to push through the grass and hedge to get into the field. I started thinking again about this situation. These release birds in behaviour are a million miles from their healthy and beautifully marked wild counterparts that I see on the continent. The hand reared birds are clueless, have no idea how to survive. The Red-legged Partridge shoots I have seen from public roads look pretty dull from a ‘Sport’ point of view. A line of beaters desperately trying to get these birds to fly into the guns but these rotund birds are basically stumbling along in front of them, reluctant to fly, they prefer to walk and hop up and over walls. The doziness of these birds and their close relatives- the release pheasants are a hazard on the roads, I have nearly crashed a few times trying to avoid them. As a non-native bird I don’t think they should be released at all. A link to a thought provoking blog by Dr Mark Avery  http://markavery.info/2014/03/31/letter-mp-response-defra-2/

I have no interest or reason to hunt anything personally, I cannot understand why anyone gets pleasure out of killing things for fun. I can understand and accept it for food, maybe as a tradition but what I see is so far removed from any tradition it is embarrassing. I am saddened by the fact I watched Grey Partridge become extinct locally, the Slimbridge coveys died out (probably a combination of habitat changes, unsympathetic farming and over-hunting) in the late 80’s. I was still seeing them between Frampton and Whitminster and even on Saul Warth to Fretherne in the 90’s. I have seen them around Severn House Farm, Berkeley in the 2000’s. The last reliable birds near to home were in the Dursley, Wotton under Edge/Tetbury/Bath square but I cannot find any these days.

I wanted to do something about it. Many years back Neil Smart and I attended a Game Conservancy meeting on the Cotswolds along with c40 landowners and farmers concerning Grey Partridge, their habitat and needs. It demonstrated that this group of people were interested and appeared to care.

I wish our native Grey Partridge were still so numerous that those that do want to hunt for food did so in a sustainable way, that small efforts are made to re-establish the Grey Partridge in England. A very small amount of sympathetic farming can make the difference for survival, surely landowners, the farming and rural communities and wildlife lovers all want to see the ‘English’ Partridge back among us.

In January I was delighted to see Grey Partridge in the ‘high’ Cotswolds of Gloucestershire after not doing so for a while. I can identify three areas in the county where the landowners/farmers are apparently sympathetic to wildlife whilst still ‘shooting and hunting’. These places are  examples where a greater diversity of birds can be found and often in good numbers, places where declines may be halted, perhaps they are reversing. These examples give great hope and highlight that it can work. It raises the question, why can’t all farmland be this way? We all pay taxes, subsidies are there to make a small allowance for wildlife.

I for one am keen to do something about it, I wanted to a while ago but alas I do not ‘own’  and cannot afford to buy any land. It would be great if local landowners/farmers were keen to support any re-establishment attempt, I and many others for sure can provide help, advice and effort to restore these birds to our fields, surely they have a right to exist locally again. Who wants to do something about Grey Partridges?

April 5 2014
Good to catch up with NRS ‘Smarty’ and go for a birding stroll together, we were both pleased to see Lapwing and Redshank settling into territories along the Severn foreshore, many could be hassled by the falcon that is hanging around the area. A Swallow flew S and we watched a Common Tern flying/fishing along the canal between Fretherne and Splatt bridges. 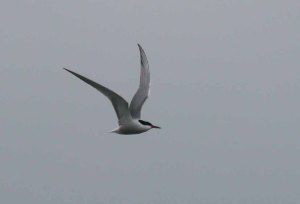 April 4 2014
Exercise regime through walking today was good and migration watch was excellent. I saw the following on the Severn…

10.15 Goosander female- flew off downstream
10.14 Great Crested Grebe-floating, I reckon the same bird is hanging around out here for last week.
10.30 First winter/summer Little Gull flew high down river, floated up at 10.45

10.45 33 Dark-bellied Brent Geese-floated up and past Saul Warth to Hock cliff. One small brown first summer and a very well whitish flank-marked bird among them. Still within DBBrent range I felt.

I had a visit to the doctors for 11.40 but returned to Saul Warth to see if I could get closer to Brents. They had moved back out off Saul Warth. A flock of Black-tailed Godwit, 1 Snipe, variety of duck and 7 Little Egrets were flushed by something on the Saul Flashes.

Brents with a few Shoveler. Lots of the Saul Warth/flashes duck have been on the estuary over the last few days.

12.05pm Located a flock of 27 Kittiwake floating on the river, they called a few times and took off heading high.

12.15 A picked up a Spoonbill flying high over Splatt/100 Acre, it was flying south, Nige Warren texted to say he had seen it from In Focus too.
12.35 A flock of c 100 Kittiwake flew rapidly low up channel in a tern-like flock and to joined another flock. I made it 131 in total.

1255 A second summer Mediterranean Gull with a very feint hood was milling about.
1300 A flock of Curlew flew high from the Dumbles calling and showing pre-migration behaviour.

Had to leave for another doctors appointment at 2.00pm.

A large, brownish-grey falcon was around the Noose, River Severn. I also saw it last Saturday on driftwood on the sands. Long tailed and winged. I also saw a Red-legged Partridge walking along the foreshore and four Otters (mum and 3 cubs) whilst out. The latter are always a joy to watch. At Townfield Lake, Frampton on Severn I went through a flock of 260 1st summer Black-headed Gulls, it contained a first winter/summer Mediterranean Gull. 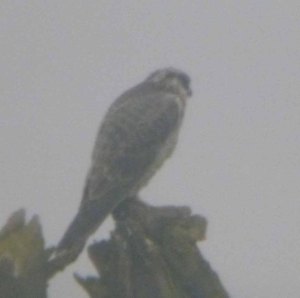 Visibility was pretty bad and by the end of the day I felt pretty awful. The smog pollution and African dust had certainly had an impact on  my health, I wish I hadn’t gone out. Worth bearing in mind that the smog is produced by humans and our usual SW winds blow it all away to somewhere else. Is Britain still the filthy old man of Europe?

The Common and Arctic Terns and Yellow Wagtail are my earliest ever in the county. The weather and conditions are producing some unusual records this year. A Black Tern was seen on the London reservoirs on 4th April!

April 1 2014
A male Goosander flew upriver at 10.01 to Saul Warth and back down at 10.14 heading inland to the canal. Three Sand Martin were the only other migrants. 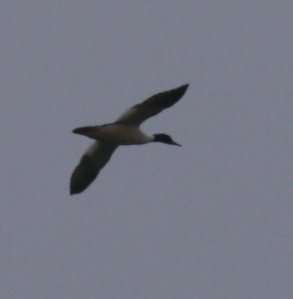