Who’s hiding in the heather ?

Having decided that a trip to N Wales could be of interest to an Anser group I began making some plans. A date was selected and after some adjustment to the original plans most of met at 2.30pm, with another along the way, this allowed time to reach the hotel and do a bit of birding before dark.

We stopped off just E of Telford along the way to listen out for an Iberian Chiffchaff, our visit was brief and the lost migrant was not in the mood to sing despite Willow Warbler and Common Chiffchaff singing away. Sparrowhawk, Buzzard and Kestrel all soared or displayed over the wooded site, Little Grebe trilled from the pond but best of all was an incubating Mistle Thrush on the nest. This was spotted by Ruth who proved rather alert, calling out birds during the trip.

We left in the sunshine but some cloud was rolling in as we reached our final birding destination for the day. The western slopes of Cyrn-y-Brain gave us a few birds as the sun set, it was quite chilly though. What was probably a Red Grouse was seen in flight by some, there were plenty of Meadow Pipits and a couple of pairs of Stonechat in the heather and gorse. Best bird was a Goshawk that arrived from some distance away and flew along the hillside giving us glimpses as it went through.

A comfortable night with a pub meal at the Hand Hotel rounded off the night before bed as we had an early start. Up well before the lark in the dark and we had assembled to make our way to the Black Grouse lek site, this being the main focus of the trip. Passing below the Eglwseg mountain a Tawny Owl flew across the car and landed in a tree to give us all views albeit in silhouette.

Up on the moor it was only just getting light, we could hear the display calls of the Blackcock, taking great care we birded using the car as a mobile hide. A lek of seven males came into view but we heard more. Moving further up the mountain we settled on another lek where up to 17 birds gathered. This species is very interesting to watch and also listen to when displaying and battling for dominance. This wonderful experience is essential for all birders as long as it doesn’t disturb the birds.

It was zero degrees so a frost had formed but we were so lucky to have a sunny dawn, the birds looked superb. Everyone had decent views so we moved on to a spot where we could scope them from distance and look over the area. A Curlew bubbled in the distance.

Red Grouse were also calling and displaying among the heather but some also flew up and glided down. Male Red Grouse pursued each other through the heather with their combs blazing. Meadow Pipits were numerous and we had closer views of Black Grouse near our watch point. It was simply superb but we had a date with our breakfast. Taking in the lek once again we tore ourselves away to a decent full ‘Welsh’ and a hot drink or two. The breakfast room looked over the River Dee and up to the Castell Dinas ruins which was a bonus. Ruth saw Grey Wagtails and two Mandarin on the river.

After recharging with a good meal we headed back out to carry on birding up on the moor. The grouse still performed, both species giving us great views. Scanning from a watch point a female Hen Harrier came through giving us all excellent views as it hunted over the heather. A selfish but typical Ring Ouzel dropped in from high and disappeared into a valley without letting anyone else see it.

We carried on stopping and scanning from the car to the Eclusham mountain seeing more Grouse. Another good vantage point and grassier area near the farms gave us five ouzel imposter Blackbirds, three smart Wheatear and a selection of other birds. Ruth called out a raptor that whizzed through, it was a male Merlin hunting pipits but the view was brief.

Fortunately we had another encounter with the male Merlin as he had isolated a Meadow Pipit, the small passerine was looping and stalling to prevent capture by the raptor. It’s a technique often used by pipits and larks, the outcome wasn’t known but it was a close and spectacular encounter.

Moving down to the woods and valley we stopped to watch a Goshawk soaring before it dropped into the woods. A Redpoll was flying about calling. A few more stops were made in the warm sunshine with a near predicted Peregrine on the cliffs (the sixth raptor species of the trip) and pairs of Buzzards above Eglwseg. Willow Warblers, Chiffchaff and Green Woodpecker were seen and heard with alternative views to the ruins of Castell Dinas. A Wheatear bathed in a puddle next to the car with another on the slope nearby. This ended a brilliant morning, just about perfect birding. 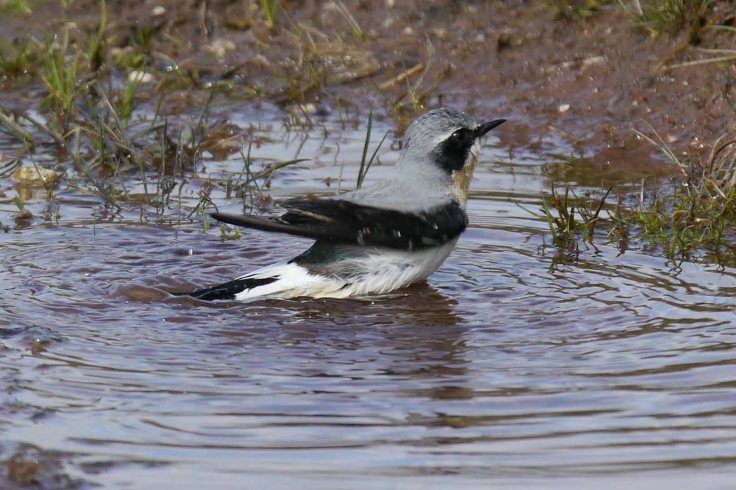 We called in a Llangollen and then began our journey home across country, it may have been prudent to keep up to date with news as a Night Heron was showing at the Venus Pool but even without this bird we had done rather well.

A great trip and thanks to everyone who joined me.