An early meet and start to make our way through the traffic and heavy rain allowed us to reach our first natural birding stop of the day. The rain had eased but not the anticipation, this was more of a twitch as not a single one of us wanted to miss an opportunity to study a ‘trip’ of breeding plumaged Dotterel that had once again this year gathered on the fields near Choseley Drying barns, now a regular stopover.

We first spotted them as a Marsh Harrier flew over and flushed the party of eight, the birds flew about before disappearing into dead ground out of view. Patience and scanning was rewarded, Dot re-found the birds at the far end of the field so we all moved to a better spot near the road to watch them feed. The Dotterel looked marvellous, females being the brightest and in neatest plumages as this species has a role reversal, the males undertake incubating and tending the young.

What a great start, one of the reasons this trip was timed on these dates and hard to top despite some great days to follow  it turned out to be the highlight of the trip for all. We also noted Whitethroat and Yellowhammer along the hedgerows before a loo and brew stop at Titchwell RSPB.

The rain still fell but we walked out to the superb fresh marsh to see what could be found, a Bittern boomed, up to five Marsh Harrier could be seen over the reeds. Cetti’ Warbler blasted out song and a pair of Bearded Tits gave us rainfall forgetting views atop the reeds. Reed Buntings also ignored the wet stuff and sang on. The hide offered shelter and more good birds. 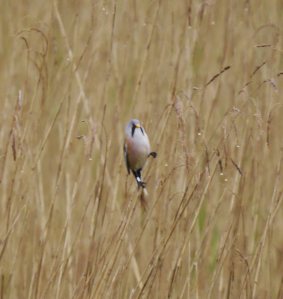 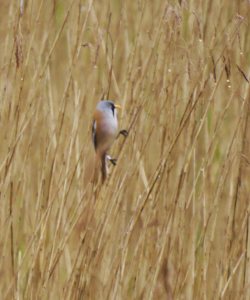 Two male Ruff in breeding plumage, small numbers of Dunlin, Sanderling, Ringed Plover with a Turnstone, Barwit and Redshank and larger flocks of Black-tailed Godwit and breeding Avocets. The Black-headed Gull/Common Tern colony also had a few Mediterranean Gulls hanging about. Red crested and Common Pochard were in the deeper water and a brood of bold or foolhardy Shoveler ventured from the reeds. Back on the seawall we saw a breeding plumage Grey Plover and Little Egrets on the salt marsh. A wander about the car park and wood was productive for birdsong but it was as we were leaving that a Lesser Whitethroat and Common Whitethroat sang,  the former showing well as we were in the car.

Moving on our next stop was at Cley next the Sea at the NOA watch point to search out an Iberian Chiffchaff, this subtle bird gave itself up immediately but was initially silent, it did decide to sing for us to confirm id. Singing Blackcap, Reed Warbler and Common Chiffchaff were also present. A short drive away was the Cley and Salthouse NWT reserve so we scanned over the marshes from the car park seeing a variety of typical wetland species before heading back to Hunstanton to check in and settle down for the night or have a drink and meal before retiring.

We all woke to a sunny and warm day, no rain. After a 0730 breakfast we loaded up and drove down to the Broads. First stop was at Potter Heigham for food supplies and soon after a long walk in the sunshine. We passed singing Whitethroats, Chiffchaffs and Willow Warblers along the hedges, woodland and broadland path.

One of our target birds for the day was a long staying Savi’s Warbler and it was singing nearby but sadly didn’t show for us. Looking over the Rush Hills scrape we abandoned birds for the magnificent Swallowtail butterfly that was showing off! 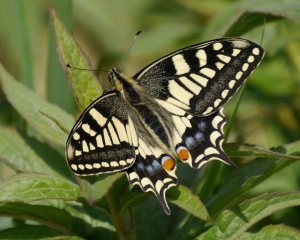 A brisk walk along the bank watching  plenty of Common Terns and Marsh Harriers were seen plus 2 Buzzard,  3 Hobby, 1-2 reeling Grasshopper Warbler and up to 5 bugling Cranes as they soared over Hickling broad. Another of the days target birds loomed into view, a giant Caspian Tern flew past.

Approaching Potter Heigham marshes we noted two Whimbrel, breeding Lapwing and got more great views of Marsh Harrier. The floods were busy with wetland birds,  a drake Garganey was pick of the ducks. A Black-winged Stilt made a short flight and came in to view briefly and the place was alive with Avocets. This new site warranted more time and exploration as reports of Spoonbills and Little Stints on the far marsh would have been a welcome addition. We retraced our steps at a slower pace seeing another Swallowtail and many other butterfly species including Small Copper, Painted Lady and Brimstone.

Once again the Caspian Tern appeared, this time it flew back and forth giving all good views over Hickling Broad, it was good to see this often difficult to catch up with species, they are well known for being mobile and heading off on long feeding forays. Another wait for the Savi’s Warbler simply proved it was taking a break. The Reed Buntings and Sedge Warblers could still be seen and heard. 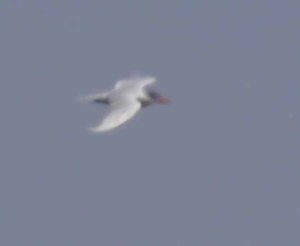 Back at car we made the short drive to a busy broadside cafe for a break and sat out in the sun for a coffee and cake, one attendee also had an ice-cream. Refreshed we headed back toward North Norfolk stopping at Weybourne, Kelling Quags and Salthouse with another short scan from the Cley and Salthouse NWT car park. Plenty of birds seen. We tried our luck with drive-by listening on Salthouse Heath for Nightingale but they were having a rest, nearby at Wiveton bridge we watched a lovely Barn Owl hunting in daylight. A well timed stop for an early-ish evening meal at the Anchor at Morston provided a very good meal and allowed time to get to an evening session with Nightjars. 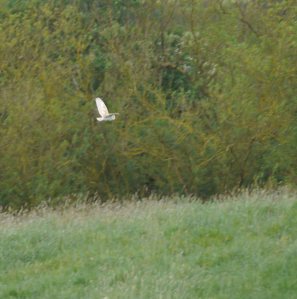 A short stop to watch a pair of Grey Partridge was a must but we arrived at Wolferton on time to walk out to Dersingham bog. We had over forty fly-pasts of Woodcock with many of them being close encounters, it was raining but it didn’t put us or the Woodcock off. The Nightjars weren’t flying but up to seven churred from the trees, it was still a wonderful experience before ending the birding day, we got back to the hotel late and probably fair to say we were all ready for bed.

Our final day arrived breezy and showery, after loading up we stopped nearby at Hunstanton cliffs, the Fulmars put on quite a show on the strong updrafts, a stalwart Whitethroat sang it’s heart out on the cliff top. We headed along the coast to Thornham Harbour where Curlew, Redshank, Grey Plover, Meadow Pipits and flocks of waders were out on the shore, a Peregrine harassed them briefly. It was nice to see flocks of Brent Geese still around, maybe sensibly they were in no hurry to get to the Arctic circle just yet. Gannets mooched about offshore.

Another stop of Brancaster beach was made hitting home how cold and strong the wind coming in off the North Sea was. A couple of Med Gulls flew over calling, more Dark-bellied Brent Geese were on the saltmarsh and a Great-crested Grebe was the best bird on the sea. It was sensible to leave the exposed coast so we headed toward the Brecks to finish of the day.

First stop was at an undisclosed site, Stone Curlew was nesting, Stonechats on show and Mistle Thrush quite visible. A short drive away was a chance to scan wires and explore the lanes for Turtle Dove without luck, a stop at another heath allowed time for a walk. Stonechats, Yellowhammers and Great -spotted and Green Woodpecker were all heard. Another pair of Stone Curlew was seen at the nest with a pair of Woodlark also giving great views. It was a great end to the birding before leaving for home and a drive back to Gloucestershire.

I’ve had great feedback from everyone who attended, thanks for the pleasing comments, it was a good trip with plenty of excellent birds.