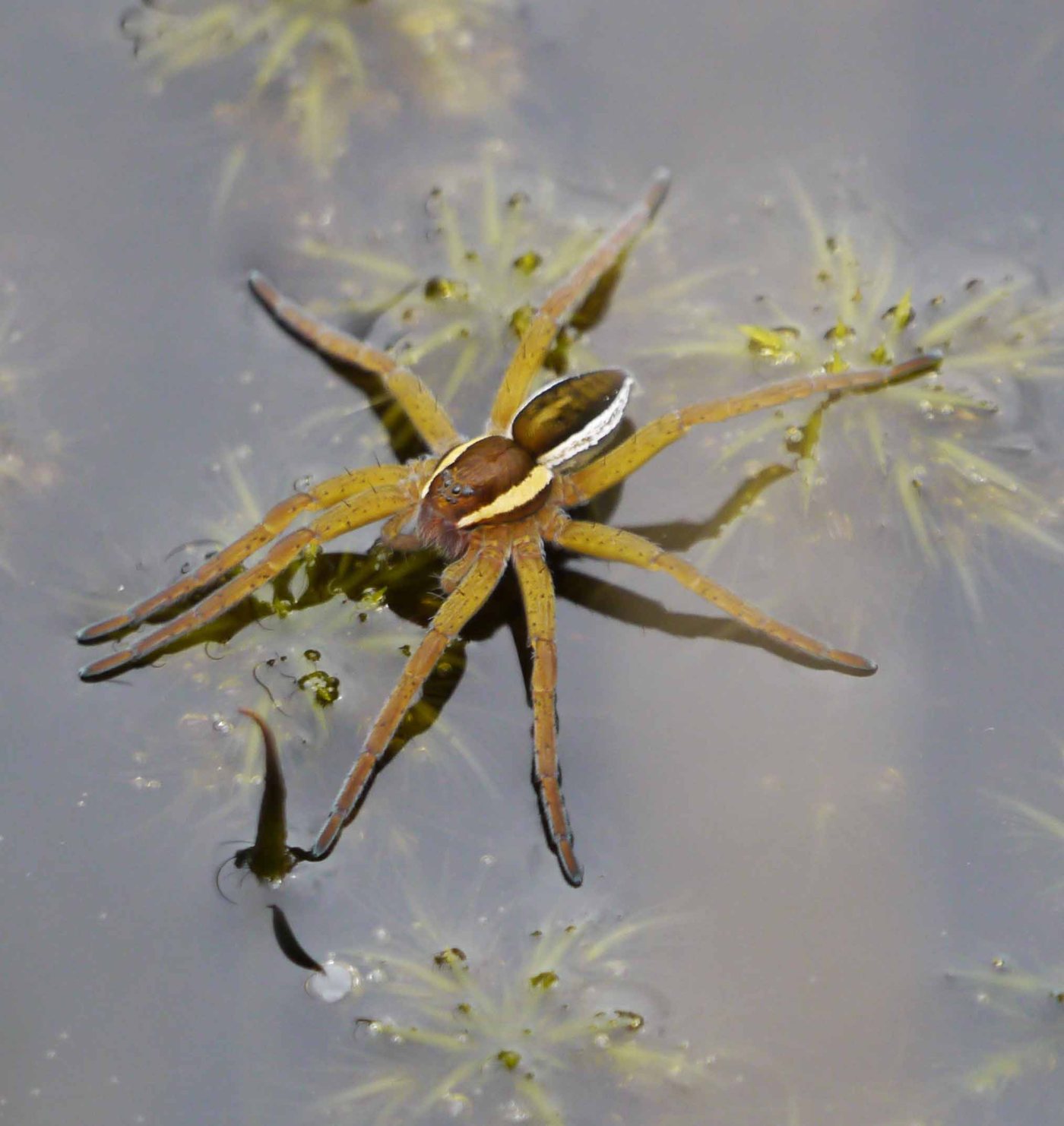 Five of us departed at 7am, we took a cross country route through some pretty awful weather that had been forecast, it was due to clear by mid morning which thankfully it did. The most notable ‘car birding’ species on the way was a Red Kite perched on a fencepost adjacent to the road. We arrived at Middlebere raring to go at 1045am and walked down the lane toward the hide.

The hedges and fields were buzzing with birds, plenty of Chiffchaffs were zipping about in the foliage with a few Goldcrest  among the tit flocks. Large parties of Goldfinch and Linnet were harvesting food from the dandelions, perhaps a last juicy meal before the dry seeds of winter dominate their diet. A Marsh Harrier hunted over the reedy areas with a couple of Kestrels for good measure.

At the hide we had missed the Osprey, it had caught a fish and was no doubt hidden away in a tree enjoying it’s meal, the programme to establish a population in Poole Harbour through releases is very encouraging.

We settled in at the hide, a call out of “alright Martin” led to an old birding/football playing friend Simon, he also joined us (WWT, Birds Russia) on the Spoon-billed Sandpiper expedition to Chukotka, Far Eastern Siberia in 2011 where we shared some amazing moments birding in the ice and snow and dodging Bears etc. A catch up and exchange of local bird information in the hide followed as Simon is also a wader enthusiast. As it happens the hide contained a variety of friendly, helpful  and informative birders with a sound knowledge of Poole Harbour making for a pleasant visit.

Out on the Middlebere ‘lake’ (actually a shallow estuary channel) we scanned the mudlfats and creeks with the autumnal heathland backdrop (of Arne RSPB). The birdy carrot that was dangled came in the form of a juvenile Stilt Sandpiper which had been seen earlier but was not present now. This stray had been seen at Lodmoor, Weymouth and Lytchett Pools proving how mobile it can be.

No sign of it but no matter as the creek was full of waders, Black-tailed Godwits, a couple of juvenile Ruff, flocks of Redshank and Avocets, 2 Dunlin, 3-4 Spotted Redshank, 8 Knot, Grey Plover and Curlew were all seen well. Plenty of Little Egrets and Grey Heron were also seen and a lone sleepy Spoonbill.

After a spell in the hide we decided to relocate. The walk back produced a bathing Dunnock with Chiffchaff for company, half a dozen Stonechat were fly-catching from the scrub and a couple of skulking Dartford Warbler were heard and briefly seen.

A short drive away was Arne RSPB where we had lunch in the car. A variety of routes were on offer but we chose the Coombe Heath trail as it offered views of the Middlebere channel. First stop was at a small pond to see the magnificent Raft Spiders, they looked superb on the dark water. Checking the gorse carefully revealed 100s of spiders and webs. Colin is going to do some research and hopefully report back on some of the species we encountered, I certainly wouldn’t want to be an insect trying negotiate my way through that silken ‘minefield’. 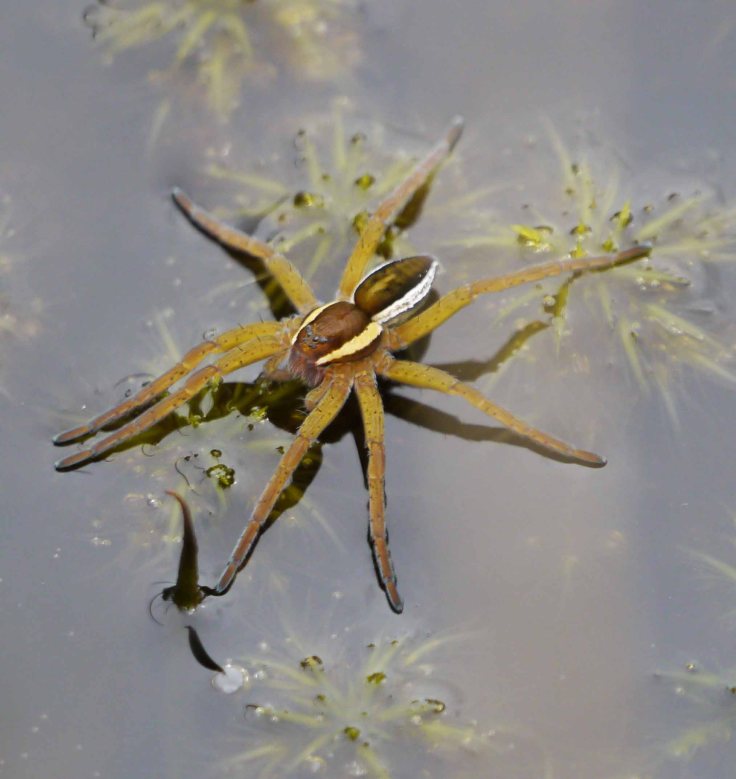 Back up on the heath looking down into the channel gave us more views of the waders, many had moved up with the tide. A panic saw godwits and Avocet flocks flying up stream with no other species for company but returned with the Stilt Sandpiper as they headed downstream. We eventually relocated the godwit flock that contained 8 Knot and I picked up the Stilt Sandpiper on the shore.

Whilst talking everyone in onto the bird it walked in among the godwits and was hidden, we couldn’t see it at all, forty minutes checking the waders at our three favoured locations followed, it couldn’t be seen and I was the only one who had seen it, was I making it up!

One last look through the godwits on the dropping tide and there it was, out in the open, feeding with the Knot and finally giving everyone a decent view with favourable light. A little bit of relief for me to prove I wasn’t seeing things, this smaller North American wader was easily lost among its larger companions and was probably asleep during the earlier search. It was also great to watch five Little Egrets form a feeding co-op, all walking in a line to push the fish ahead in the channels.

Phone-scoped image of the Stilt Sandpiper among the godwits 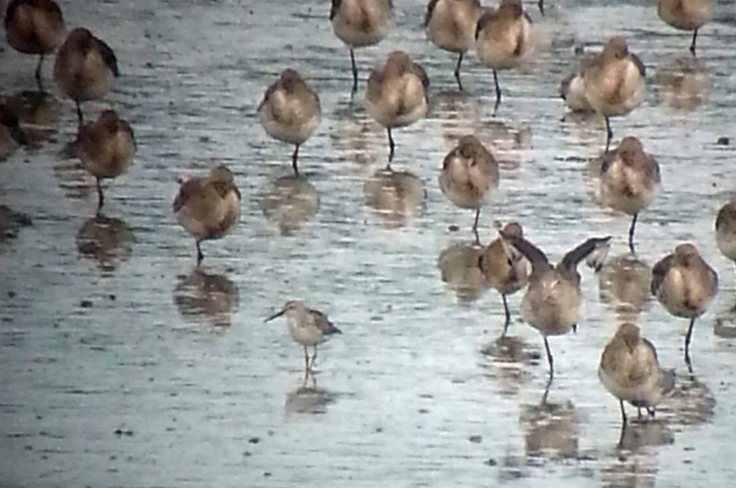 A pleasant walk back to the car park offered another hide and seek Dartford Warbler, mostly hide,  at least the Green Woodpecker showed well in the same area earlier. Another short drive away and we checked some pools at a local boat year (that allowed temporary access) for a Red-necked Phalarope that had been present recently (at one stage it also had a Grey Phalarope for company). A few Canada and Greylag Geese were seen as well as Kingfisher and Reed Buntings, the highlight was a flock of 11 ‘Jackdaw bothered’ juvenile Ruff on the water meadows. See pics below.

That was it for the day, over 50 species seen, I was glad of a decent drive home and we were back by 7.40pm.

Thanks to Barbara, Anne, Colin and Ruth for joining me.