High fives after seeing the enigmatic Desert Sparrow, can you see it?…..

I travelled with four other ‘hand picked’ birding friends which consisted of.. Jer ‘Jubs’ Squire (JJS), Paul ‘Walks or Walkdy’ Walkden (PW), Bob Radford (RR), Neil ‘Smarty’ Smart (NRS) and myself (MJM). We flew from Bristol to Marrakech and stayed in the country for 8 days and 7 nights. On the first night we stayed at Chez Juju at Oukaimeden (cold showers, good food and they kindly placed heaters in our rooms, it froze outside at night and we felt the altitude, I had a migraine attack possibly from the height we were at but more likely from the stresses of the week leading up to the trip, incidentally the week ended on the same note probably through lack of sleep) on 16th for the High Atlas above 3000m and Ourika Valley birds, Hotel la Valee in Toubante (good food, swimming pool that we did not use, dining in an authentic giant nomad tent set up inside a room, hot showers) near Ouarzazate on 17th  for the Tagdilt Track and Boumalne de Dades/Tinehir/Tinejdad/Erfoud/Rissani to the Auberge Derkaoua (luxury food and hot showers when the generator is on, swimming pool and very relaxing place all round, great birding in the gardens c £60.00 per night) which is N of Merzouga on 18th and 19th,as a base for all desert and dune birding around Merzouga, the Erg Chebbi and Rissani. We hired a Toureg guide and 4wd from 0500 to 1200pm on 20th who took us on a night drive, around the Erg Chebbi to c15km of Algeria, a nomad camp for tea. A great day out but one of our main targets was not located. We returned West via the same route but took in a detour to the Scrub Warbler site N of Goulmima and ended up at the birders favourite Hotel Soleil Bleu, Boumalne de Dades on day five for more Tagdilt track action. We had a lie-in to 0730 and birded the area all morning to early afternoon, the loss of a room key caused some disruption but the manager of the Hotel was a decent fellow and sorted it out eventually, was very helpful. A long drive saw us give up and stay at Tazanakht on 21st because it was on the way and we were tired, to our great surprise it was a dry town for alcohol and we were as usual in the mood for a couple of bottles of beer to slake our thirst each evening. It did us no harm to miss out and the Hotel Taghdoute gave us a very good meal and breakfast, one of the best and all for c£14.00 each, JJS and I were kept awake for much of the night by the street noise/cars etc (cold shower in the evening). On the 22nd we stayed at the Hotel Hagounia (warm excellent showers) in Insegane for Oued Sous and Tamri as we were leaving on the 23rd. This place was not particularly great, in fact grotty but was only £6.50 a night pp. We ate at a French Restaurant c2km out of town which was quite a walk, had a great meal and a taxi back. A race back from the coast with Jensen Button like manoeuvres from me saw us reach the airport with five minutes to spare.

Moroccans are very friendly and helpful people, we had a little over the top sales efforts at Oukaimeden with fossils/minerals which were spectacular but too much for the Ryanair 15kg limit. Otherwise it was low pressure sales and in few places. It is essential to take a step back and think about the big picture, most are kids and are just trying to make a few quid, at Dayet Srij (Lake Merzouga) the kids follow on bikes and quietly and gently rolled out newspaper with their wares, just have a look and be polite, I did buy a bracelet for my daughter. We had a couple of kids following us at Rissani, they just wanted to practice English but were so noisy we could not hear or locate Saharan Oli Warbler, this was annoying but with the benefit of sleep and hindsight not really a problem, more time and less birding would have seen us more relaxed. We tipped Guardiens who looked after the car at night, c 20 dirhams seemed OK. We tipped an unofficial guide who was hanging about the Oued Massa reserve entrance 40 dirhams, he was not content with this! The guy hid when an official van went by and signalled for us to be silent. In many towns we were the only N Europeans but never felt threatened, a few sad souls we encountered were clearly insane but were no bother. In the Atlas the kids wave as soon as they see who is in the car, I thought it was down to my recent BBC appearances but then remembered they probably do not watch TV. Even two year olds were playing on the side of the road. We were asked for money by kids around Agadir, they signed hunger and the need for shoes but when they realised we were not going to give them anything started laughing and joking with us, I was asked if I wanted to see ibis and for un stylo (a pen) by one Barcelona FC shirt wearing child of 8, I said I would show him some and that I did not have a pen on me so he rode off laughing barefoot down the hill at Tamri. Some women did not like to see us in shorts, we had a tyre problem which was fixed for 50 dirhams in Massa but were getting looks, at Tamri the women shouted no at us if we glanced in their direction, they were all covered head to toe and we all were very admiring of the colourful robes that brighten up the whole country. I would say it is best to keep your zip-offs on when near Moroccans out of respect. At Oued Massa, everyone said hello, bonjour and we extremely friendly, great to be amongst. 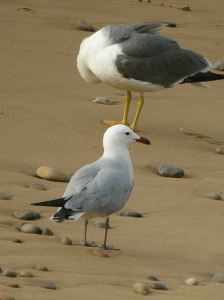 The high Atlas around Oukaimeden and the Ourika Valley, Tizi n Tichka pass at 2500m, Ouarzazate and the Barrage el Mansour Reservoir, Boumalne de Dades and the famous stone desert (hammada) of the Tagdilt tacks/Inoukien road, the Deserts around the Erg Chebbi, the Oasis from Rissani to West of Jorf, the scrubby desert N of Goulmima, cultivations and tamarisk stands en-route including the ‘Magic cultivation’-12km from Tazenakht on Taroundant road, the Sous Valley, Oued Massa reserve and the sandy hills and dunes along the coast around Tamri oued mouth.

Species not seen but looked for
Houbara Bustard Chlamydotis undulata; we looked in all suitable habitat around the Erg Chebbi with a ‘guide’ and 4wd . The Saudi Falconers are hammering this species each winter and it is scarce, there is also talk of released birds in the area, it would be interesting to know if they are Maqueen’s or Houbara , if, this is the truth. I can’t help thinking that with the benefit of experiencing this tour that we may not be helping it’s cause by looking for them, if it was only for birders seeing them and the often tolerance these birds show when they are only being watched it would be OK. The fact they are hunted as well could cause problems. We followed a little used ‘track’ that must be the ‘Houbara’ route. I also wonder what will happen to the desert vegetation if driven on regularly by 4wd without controls, a free for all seems to be the case! The long term outlook may not be good and it would undoubtedly be better if controls were in place, it would be easier to find birds that are used to seeing 4wd on regular routes.

Seebhom’s Wheatear Oenanthe seebhomi; we were a little early at Oukameiden for them I feel but one was reported outside the Soleil du Bleu, Boulmane the day before we stayed. We tried for Saharan Olivaceous Warbler in the wadi at Rissani but being the middle of the day, very hot, very tired (three nights of 4-5 hrs kip) had a couple of Morroccan kids wanting to sing and practice their English to us and having just watched the kaleidoscopic Blue-cheeked Bee Eaters were a little overwhelmed with colour and were losing enthusiasm for itchy scratchy things in bushes. Shameful but reality birding.

Pharoah Eagle Owl; We did not look for this bird but is was seen by other birders at Rissani and by a dutch crew near the drinking hole on the Tagdilt track. Ring Ouzel was also seen by the same guys at Oukameiden on 17th around the herders huts. We had a marvellous set of birds and cannot complain as all were quality sightings and experiences, I shall never forget this trip.

Algerian Hedgehog Aterix algirus; JJS found one rolled into a ball at the entrance to Auberge Derkaoua (The Desert Inn) on 19th.
Bat sp; perhaps a few species seen over many towns/wadis but not specifically identified.
Cape Hare Lepus capensis; seen near the Erg Chebbi in grassy dunes.
Rabbit Oryctolagus cuniculus; one in the grounds of Auberge Derkaoua on 19th.
Barbary Ground Squirrel Atlantoxerus getulus; seen in the Anti Atlas.
Greater Egyptian Jerboa Jaculus orientalis; one lamped outside Auberge Derkaoua at night on 19th, JJS saw one in the grounds of the same Auberge in daylight on 20th, c10 seen in the night drive on 20th by 4wd around the N end of the Erg Chebbi. I have always wanted to see this creature as my Grandfather was a Desert Rat in WW2 fighting Rommel’s Afrika Korps in N Africa.
Shaw’s Jird Meriones shawii; I saw a creature at the Scrub Warbler site that fitted this sp rather than any others. It was smaller than Fat Sand Rat and it was seen only an hour from dusk.
Fat Sand Rat Psammomys obesus; Very common in the Tagdilt track are and Merzouga, quite confiding especially from a car and no doubt a staple diet for many birds. Their numerous tunnels in sandy soils were found everywhere. I found it a very pleasing creature to watch.

Emperor Anax imperator; males seen at Oued Massa on 22nd.
Lesser Emperor Anax parthenope; seen at many sites.
VAGRANT EMPEROR Anax ephigger; seen in the wadi adjacent to Auberge Derkauoa on 19th and around Dayet Srij in large numbers on the same day. Probably responsible for many other sightings.
Red veined Darter Sympterum fonscolombii; very common around Dayet Srij on 19/20th. Bluetail sp Damselfly Ischnura sp; still working on the id of many seen at Dayet Srij on 19th but Oasis and Saharan probable.
A further species of dragonfly was seen at Oued Massa but not i.d’d.

We had fun too, see below. 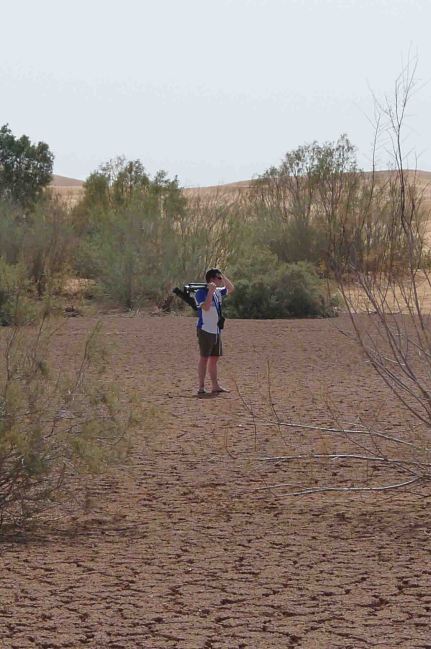 There used to be a wetland around here….must… keep… looking… 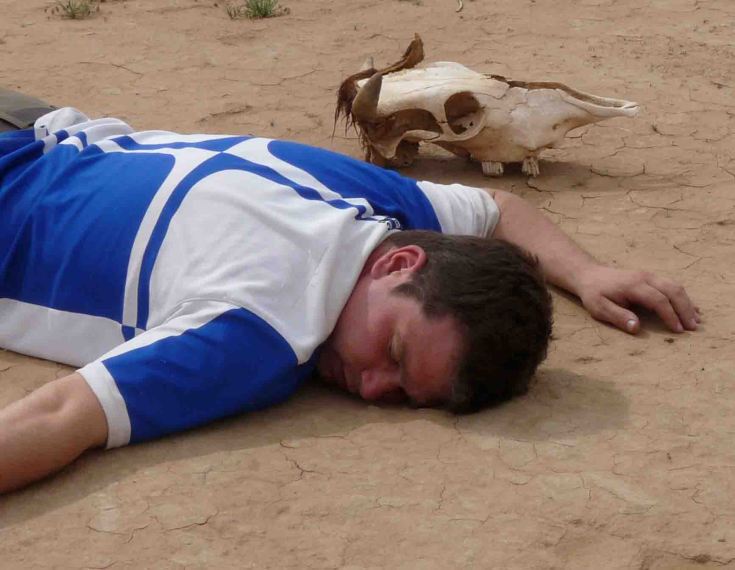 We found him two days later…gave him a drink and.. he was ressurected as……
Obi Wan Kenobe from Star Wars c1977.
(Where is the Seebhom’s Wheatear Obi Wan?, your our only hope)
May the force be with you Jubs..
Last seen in a wadi near Tazanakht, the saga continues……