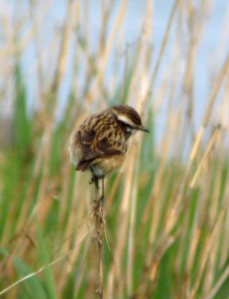 Four of us gathered for an Anser birding session, it was left open so I could make a call on where we would head for the night before. It had been so good locally all week and the tide was favourable so I suggested searching the Severn. It was a good move. Parking up and walking the Severn Way footpath we enjoyed the benefits of Spring and the birdsong which included a showy Mistle Thrush. The hedgerow gave up a singing Lesser Whitethroat and a large flock of hirundines (Martins and Swallows) fed all around us at ground level, the sheltered spot providing insects. We saw a few local birders out and about, thanks to Greg Mabbett for pointing out a male Whinchat, one of the birds I was looking out for the group. At least three Wheatear fed nearby.

The waders began arriving, three Whimbrel, two of which headed inland. At least 20 were present. 12 Curlew and a distant Bar-tailed Godwit were noted but closer flocks revealed 14 Grey Plover (a few in stunning breeding plumage), 35 Red Knot (lots of fully red birds), 340 Dunlin, 210 Ringed Plover, 4 Sanderling, 3 Turnstone, 2 Oystercatcher and a Curlew Sandpiper in breeding plumage (not the bird seen last Thursday). A couple of Yellow Wagtails flew by. Swifts were feeding and moving overhead, Blackcaps, Chiffchaff and Green Woodpecker added to the commoner passerines. Three Common Gull were on the estuary. The wader flock panicked and dispersed when a Kestrel flew across the river.

Moving on to Townfield Lake we noted a Common Tern and more Sand Martins and Swifts, a Nightingale was heard, Common Whitethroat seen displaying, Garden Warbler sang but remained on the move. A pleasant morning out with some stunning birds. Thanks to Ruth, Colin and Jeanne.